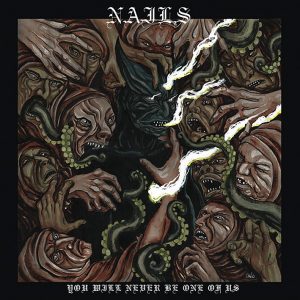 The Secret Is Out…

I am New to Nails. So when a friend introduced me to them a few months ago I was very ho hum about it. I’ve heard a million bands like them and I wasn’t very impressed until I saw the video for the title track of their new album. Needless to say, I’m a firm believer in their work; it now makes sense for me. I also dug into their history and watched a ton (tonne for my UK friends) of live footage courtesy of Hate5six (www.hate5six.com) and delved into their crust\hardcore roots a bit from a live perspective. I get it. The attitude, the intensity, the sheer raw power explains my newly found devotion.

A lot has been said in indie zines and heavy metal press about Nails signing to Nuclear Blast (and that they’re a HC\Grind\Crust band on a heavy metal label) for example… “They’re selling out, no more DIY, it’s all downhill from here” etc. Being a new fan and a reviewer tasked with this album I can without a doubt say that it’s a good thing. Imagine an entire legion of hardcore/metal/crustgrind kids and adults who can now access this band and have it available to them. All any band wants is to put out music and hope people listen to it. The more, the better, right? For some that’s selling out or buying in, but for the new fan it is a godsend. For over a year friends told me about them, I saw a post on a social media site……..That’s nothing compared to the quality of sound (yes, sonically) the bigger budget provides along with the access to larger markets. I would rather have one million Nails fans than say 100 million Nickleback or Disturbed fans running around and playing their music and proclaiming the gospel according to Chad/David.

On to the tracks:

The title track “You Will Never Be One of Us” is drenched in feedback and steamrolls you from the very start. There is a bit of mid-tempo chug that breaks the time signature up and then some very heavy groove. At 1:29 it’s worth the time to listen.

“They Come Crawling Back” clocks in at a monstrous 8+ minutes (which is an entire crust album in some cases) and is thick, weighty and the groove is like Pantera  slippery with a  Crowbar-esque twist. Riffs with mass, heft and volume. Then add chaos. It is all that is good in music period, without a genre attached.

“Savage Intolerance” blows the doors off with its blasts and up tempo stomp .riffs so juicy you can squeeze them  and then back to the heavy. Always the heavy. This is a good time wrapped in 1:46 seconds.

And no Nails album would be complete without an audio Claymore Mine of a tune. I chose “Parasite” at a gainly :55 seconds it does what years of many other bands have failed to do. Blow you away. It is an onslaught of sound, a flamethrower of pure fucking hate. It will curbstomp your nuts and you will like it. Around the 30 sec mark it slows down a bit, just to catch its collective, beastly breath and then it’s back upside your gob………and doesn’t let go. The song “Friend to all” does the same.

It’s easy to see that this album has something for the lover of heavy\aggressive\angry music. Call it what you want but just listen to it. This is a sonic assault, you will feel violated in a way the only a sadomasochist can appreciate. This is a beat down your ears will beg for time and time again. The best part about this being a full -length is you get about twice the recommended dose of Nails, with better audio, huge vision and immeasurable awesomeness. Lucky Seamus Diamond

Many reviews talk about how influences, often called ingredients, are poured into a blender and this or that sound comes out. Or they go on about how this classic band and that not-so-classic band had a love child. Nails throws all those babies in a blender, disects Napalm Death, dismembers Slayer, and tears the heaviest breaks from those bands without anesthesia. Liquid anger, pitchblack misantropy, bile and probably some roadkill engulf this record. On ‘You Will Never Be One Of Us’ Nails continue down the path of destruction they’ve been walking since 2010 with ever increasing momentum and ever increasing bloodlust and thier lyrics continue to imagine the bleak future which awaits alll of us. Oh well, at least we can all thoroughly enjoy this record before the apocalypse eventually sets in. Martijn Welzen