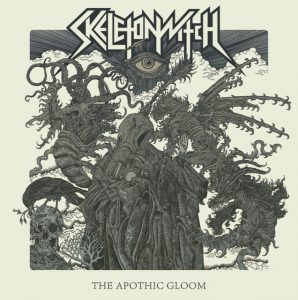 In February it was announced that Adam Clemens would take over the vocal duties from Chance Garnette who had been the bands singer since the start of Skeletonwitch in 2003. After five full-length albums, and a few other releases it’s not that easy filling in for someone who has had a tremendous input in the sound of the band. ‘The Apothic Gloom’ is the first, four-song, calling-card for Adam. These songs are constucted from epic thrash that’s been built on a blackened foundation, but I’m not, yet, entirely blown away by them. It definitely has to do with my perception of the band, as I’m still epecting to hear Garnette. Looking past that preconceived notion, it does get better as the band as a whole seems to have stepped up to the plate in an efort to create their best songs to date. It’s very smart releasing a few songs out before the next album, a way to test the water so to speak. Now it’s a matter of endless touring to make this transition as smooth as possible and knowing the Skeletonwitch work ethic, that shouldn’t be a problem at all. Martijn Welzen