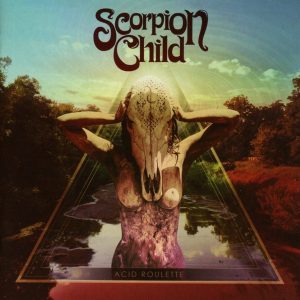 With this, their second release, Scorpion Child have morphed into a fully matured mutha of a darn fine heavy rock band. The self-titled debut had its moments for sure, but kind of got lost in a plethora of other great releases and failed to hit the heights that many of its competition achieved. Acid Roulette instantaneously rectifies that previous misdemeanour, with album opener ‘She Sings, I Kill’ hitting like a juggernaut. Its psychedelic intro drifts naturally towards a deeply rhythmic millennium retro-rock classic that ensures this album explodes from the get go. The speed and drive of ‘Reaper’s Danse’ has a nice edge, dismissing any notions of predictability; but it’s ‘My Woman In Black’ and ‘Acid Roulette’ where the band really show off their potential to capture the collective emotional zeitgeist of music fanatics – with the latter faultlessly fusing Led Zeppelin and Janes Addiction. What Scorpion Child have done this time is hone their tunes and add addictively imposing grooves to them.  It’s heavy, with a hint with a stoned doom, and it’s one well blended, tasty cocktail. Mark Freebase