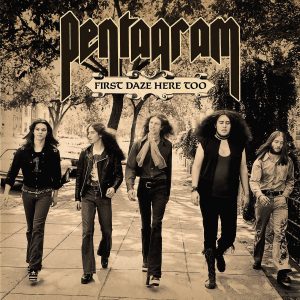 Dwelling in all things dark since their humble inception some forty (yes forty!) years ago, this legendary D.C. band have created and composed masterful heavy metal / doom / rock from the time of their troubled birth. The name Pentagram has long been established alongside all their contemporaries. With previous reissues long out of print it is now the turn of Relapse Records to offer up their version. Classics ‘Forever My Queen’, ‘Hurricane’ and When The Screams Come’ sound equally as enticing now as they did when originally aired – still as heavy, still as groovy, and still showing Bobby Liebling’s eerie vocal rasp. There is a dynamic on tunes on ‘First Daze Here’, a driving rhythm, a certain edge, which keeps their sound so vital. Many have tried to emulate this band, but few have succeeded – Pentagram are originators. Along with the twelve tracks found on previous versions of this record, Relapse have spoiled all of us fans and included a bonus disc featuring the original mixes of ‘Be Forewarned’ and ‘Lazy Lady’ from the The Macabre 7”. Mark Freebase