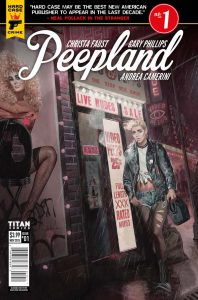 TITAN COMICS KICKS OFF NEW LINE WITH A RANGE OF TOP CREATORS INCLUDING MAX ALLAN COLLINS (ROAD TO PERDITION, QUARRY) AND WALTER HILL – DIRECTOR OF HIT MOVIE THE WARRIORS!

Titan Comics is drawing down on the iconic crime imprint Hard Case Crime, ready to pull the trigger on a brand new line of comic books.

Hard Case Crime is the leading publisher of hardboiled crime novels, publishing the giants in the genre: Stephen King, Michael Crichton, Lawrence Block, Mickey Spillane, Ed McBain, Donald E. Westlake, James M. Cain and Max Allan Collins, whose best-selling Quarry series is destined for TV in the highly anticipated adaptation for Cinemax in September – and for comic books in an all-newQuarry comic series from Titan and Hard Case Crime in 2017.

Debuting in stores on October 5, Triggerman is an operatic Prohibition era mini-series, written by Walter Hill, director of cult 70s New York City gangland smash The Warriors, and illustrated by trusted collaborator Matz (Body and Soul). In the mean streets of Chicago, a convict is thrown headfirst into a life of bloodshed and bullets to save the girl he left behind… 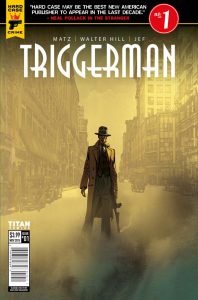 “We are so excited to be steering the Hard Case Crime series into a new frontier,” said Ricky Claydon, Direct Sales & Marketing Manager at Titan Comics. “We aim to bring to comics that same grit and gristle that Hard Case Crime is famous for!”

“Before I became a mystery reader, I was a comic book fan – so the chance to expand Hard Case Crime into the world of comics is a dream come true,” said Charles Ardai, winner of the Edgar, Shamus and Ellery Queen awards and editor of Hard Case Crime. “Hard Case Crime is already known for its sexy, stylish artwork, and the sharp, tough, high-velocity stories we tell are a natural for the medium.”

Like a case yet to be opened, the complete range of titles is still lurking in the shadows. For more announcements and news on this exciting new line of comics, join Titan Comics on Facebook, Twitter, and Tumblr.