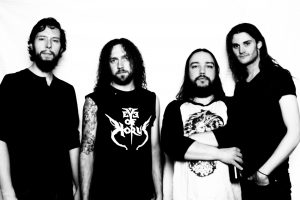 Behemoth- Demigod This album holds a very special place for me, being the first ever truly brutal death metal album to make it into my life. My ears and my writing were never the same.

In Flames- The Jester Race- Black Ash Inheritance I learned about In Flames from checking into their “Acoustic Medley”, which some may remember was the backing music for CKY’s “freezing of the bee”, which was my first introduction to the incredible world of Swedish melodic death metal.

Nile- Annihilation of the Wicked To this day this album still hold up as one of the heaviest, hardest hitting albums I’ve heard. Dark melody, wildly intense drumming. Just an all-around great album.

Death- Human Any list of life changing metal albums is not complete without mention of Death; this one speaks for itself. I found out about Death fairly late in my “metal life” after having the opportunity to meet their manager Eric Greif at a gig. Buying one of their discs set me on a path I wish I would have walked much earlier.

Deicide- Stench of Redemption I first heard this album hiding in the back of a truck on my way to see Cryptopsy for the first time. Legendary night for death metal influence. Glen Benton is the epitome of brutality on the vocals and having never heard Ralph Santolla’s unique guitar style before I was hooked. This has held for years as one of my favourite death metal albums.

Fleshgod Apocalypse- Agony Changed my very ignorant view that ‘no new metal bands are as good as the old style’. I was very wrong indeed.

Testament- The Legacy I was so lucky to find an original copy of Testaments first album. A perfect example that you don’t have to be old or experienced to make a killer album. Alex Skolnick really lays it down on the lead guitar for this album. As far as thrash metal is concerned this is some top of the line playing.

Sepultura- Arise After first being introduced to Sepultura from their Chaos A.D live DVD I was hooked ever since.

Nigel Kennedy- Antonio Vivaldi’s The Four Seasons It’s not all about death metal for us; classical music is just as much a part of my musical life. This album has surely influenced many of metals top acts, the same goes for Krepitus.

Krepitus new album ‘Eyes of the Soulless’ is available now