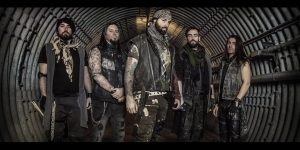 Blind Guardian Imaginations from the Other Side They are the first metal band that I really got into; they started the ball. At first I didn’t like bands with screamed vocals so power metal was my way in and Blind Guardian had plenty of solos and melodies to keep me occupied and working on my guitar chops.

Children of Bodom Hate Crew Deathroll They’re the first screamed vocal metal band I ever got into; mostly because of the guitar work. I was becoming better and better as a player and that record had everything a guitar player wanting to shred needed to learn.

Kiss Psycho Circus Kiss has always been a huge part of my life. As a kid I was mostly attracted to their image and only knew a couple of their songs. Psycho Circus was the first Kiss album I ever owned and I think it’s a really strong and over looked record; I re-discovered it later in life and it’s a constant in my car radio; playing very loud. Also, Ace Frehley is the reason I always wanted to play guitar as a kid.

Def Leppard Pyromania I came to Def Leppard later in life but damn does that album hold up. It’s such a strong record. I got a lot of things from them as a songwriter and how to arrange stuff, with guitar overdubs and vocal harmonies.

Trivium Shogun An amazingly overlooked album. To me this was their creative peak (where they stretched their wings and tried things out) and this album is a riff and shred monster. This record made me discover certain way of creating riffs and arranging songs. It made me see song writing in a different way; how to expand in different ways yet keep things flowing.

Trivium In Waves Trivium’s Opus right there. It’s a masterful blend of simplicity and intricacy. It’s years of learning their craft and pulling all their resources together to create, in my opinion, one of the strongest album ever made. It’s been a source of inspiration in all facets of my music career. This record has it all.

In Flames Come Clarity An important album because it opened my range of musical taste and exposed me to a newer sound in metal that I wasn’t aware was out there yet. Very influential album around the time of writing our first EP Reverence in 2009/2010.

Iron Maiden The Number of the Beast The intro to the song “Number of the beast” itself is the main reason i bought my first electric guitar (epiphone SG special, black ala Tony Iommi) when i was still learning. It’s a classic riff and great sounding but back when I caught that riff on a muchmusic tv special on ‘Maiden, I didn’t even know the band; that riff alone got me hooked and then learning how to balance those twin guitar attacks.

Boston Boston I was raised on classic rock so all those old bands really shaped the way I write, play and approach music. Boston is a classic band and their first album is a masterpiece. It’s guitar harmony heaven, not unlike Iron Maiden in the years that followed and once again you can clearly hear the influence on how I harmonised the guitars in Chariots of the Gods.

Sinergy Suicide By My Side The ultimate shredder’s delight. You can’t go wrong with Alexi Laiho, who only focuses on guitar in this side-project, and Roope Latvala, who also moved to Children of Bodom later on, but now his hands are set free and the master can truly shine against the skills of his younger acolyte.

The truth is out there