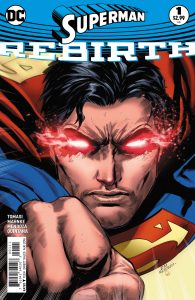 If you can be sure of one thing in the world of comics, it’s that Superman always wins. Always. Big Blue always wins in the end. He may look like he’s losing at one point and things may look bleak at another but the last son of Krypton will always prevail. Well, until now …

After the New 52 obliterated every DC title and reset the whole lot to issue number on, and in many cases completely reset the stories to a new “day one”, the concept of a Rebirth series, again starting at number one may seem like yet another marketing ploy to lure in more new readers. The temptation of picking up issue one and then having the complete set is, I must confess, something that appeals to me, but only, and this is a great big only, if the stories are worth the effort. Are they? Well, let’s have a geg at the selection that recently plopped on to the door mat in the ante room of Gadgie Towers. 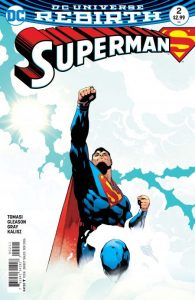 First up, Superman. I don’t care what anyone says, Superman is the best superhero of the lot, though the stories he is written in do not always meet the gravitas that Kal –El really deserves. When they get Superman right – see Grant Morrison’s All Star Superman or Superman for All Seasons for example – he soars up, up and away. When they don’t well, he falls in to the trap of same old, same old get the girl beat the baddies generic hell. Coming up with well written and imaginative tales about someone who is pretty indestructible is no easy task so as the New 52 drew to a close the man with an “S” on his chest was killed off! Yep, Supes is dead. Now I followed the Man of Steel through his various New 52 incarnations, namely Action Comics, which at times was intriguing, introducing a cast of supporting characters and positing the question “What if he lost his powers?”. It did however fall in to the trap that superhero comics often do. Each setback is eventually overcome, every wrong righted and everyone is happy by the end … or at least it appeared to. As the series wore on and crossed over with other Kryptonian titles, it appeared that all was not well with Clark Kent. Fighting Doomsday, massive exposure to Kryptonite, an epic war against time travelling immortal, and all round bad sport, Vandal Savage amongst other things had taken their toll on Superman. He was on his way out and at great pains to stress to all and sundry that this really was it and it won’t be like “in the comics” where he survives due to some last minute miraculous intervention. Really. It happened. They killed him. Wow. 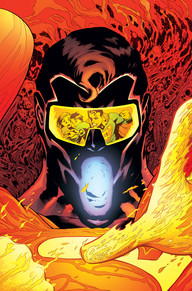 A world without Superman then. This has happened before though hasn’t it? Long time fans will recall how Supes titanic dust up with Doomsday way back in the early 1990s – wowzers, is that really over twenty years ago now? – saw other heroes lining up to attend his funeral and the aftermath where a number of new “super-ish” characters were lined up as possible heirs to the red underpants and cape. Of course, it didn’t last long and before we knew it, somehow, he was back and flying around plucking plunging people out the air and scrapping with intergalactic and super powered assailants once more. Superman Rebirth 1 plays on a link to that ground shaking, earth quaking, best selling comic ever scenario and teases us with a new (or rather the older) Superman from the Death of Superman twenty odd years ago who has been around all along. Patiently watching the “New 52 Superman”, and his demise, from the shadows, this enigmatic fellow is to all intents and purposes Clark Kent and his alter ego, he even has the requisite Lois Lane and their son in tow. Not so much a “who is he?” but more a “how is he?” Spending an entire issue with Lana Lang he drops the occasional clue but she remains none the wiser and so we get in to the series proper with Superman #1 and Lana looking for answers as you would imagine she would. 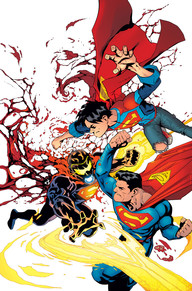 Superman is back! This time he has a son who is being brought up on a remote farm and, yep you guessed it, is learning to deal with his burgeoning powers under the tutelage of Superdad and the interesting young lass from the neighbouring farm who may, or may not, have rumbled him. So far so familiar, except this time, the young lads mentor is also blessed with the same super powers from a yellow sun and not some salt of the earth farmer. Of course it’s not just Ms Lang who is wondering what’s going on and the Dark Knight and Amazonian Princess, the other “big two”, show up to try and suss out who this “new” Man of Steel. The artwork is wonderfully big, brash and colourful as befitting Superman but the last few pages take it in to a darker tone. That always happens when the Bat shows up doesn’t it? Strange then that Superman 2 doesn’t really follow up on this Justice League thread, instead focus is placed on the relationship between Supes and his little Superling. Son of Superman has something of a “Bring Your Kids To Work Day” as the pair whizz off to the arctic to deal with a Lovecraftian beasty and stricken nuclear sub. Initially it feels like a scene setting prologue, like in a film where the lead character is shown doing what they do before the real story kicks in. When a mysterious force seems to be stalking the super pair however, it’s clear that there’s more to this than meets the eye. Superman 3 and Superman 4 throw this mysterious force right at the Superfamily right from the off and yet again, the ties that bind our hero to his long dead home world just will not leave any of the Mr Kents we know be.

The new “reborn” Superman is a mixture of the familiar and the new. The secret identity is now not that he is masquerading as a clumsy boy scout of a reporter, but how could he be Superman and where has he been all these years? A young Clark coming to terms with the fact that he is different, and learning the control and responsibility needed is now transferred to the younger Superboy only this time he has the mentor of all mentors. The links to the past are a nod for the “veterans” of the readership – Bibbo, Krypto(!) and the idea that the Superman, and therefore, I imagine all superheroes, of the 90s are not the superheroes we’ve been reading about in the The New 52 is maybe the new hook DC needed for this next venture in to adventure. Of course, there’s also the thread that, at the minute is left hanging, will explore what his (or his predecessors) fellow Justice Leaguers will make of it all. At the end of the New 52 I was out of the game … Superman is dead, oh look new Supermen and oh look, Doomsday is back again … DC were gonna have to work harder if they wanted my ££ every month, but you know what after this opening salvo? I’m back in. 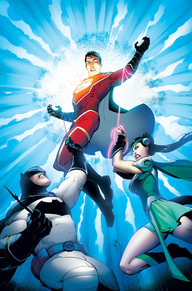 You may have noticed in that last paragraph I mentioned new “Supermen”. Yes, that’s not a typo. As if getting to grips with the idea that 90s Man was back, we were also teased at the tail end of the New 52 Supertitles with a new Oriental Superman. I kid you not. Excitement in the comic world saw issue 32 of Batman/Superman seemingly sell out in a day (and appear all over eBay for £25-ish in the week it should still have been on the shelves for £3 or summat) as word spread that the “New Chinese Superman” makes his first appearance in the ever convoluted timeline of Superman and men. Well, Kenan Kong is back with his own book in “New Superman 1” and “New Superman 2“. Unlike his Western predecessor however, this super being’s origin story is more like Captain America if the Cold War was being “fought” now against China instead of the Soviets. Shady government organisation, The Ministry of Self Reliance, are busy recruiting for the formation of a Chinese Justice League. For some reason, Kenan Kong, an arrogant bully, introduced to us picking on a smaller kid who’s Dad is some kind of a big deal, has been spotted and picked up for the programme.  These opening issues set the scene and challenge you to go with it as I am left unsure if this is a tongue in cheek parody or a throwback to the days when kids would lap up anything, no matter how ridiculous it was. Kenan, thrown in to the most mental day of his life, is full of wise cracking quips and remains pretty unlikable in a Guy Gardner sort of fashion. On the final page of issue 1 when confronted with .. well, I’ll not spoil it …  he comes out with “You have got to be kidding me”. My thoughts exactly, my thoughts exactly … Marv Gadgie