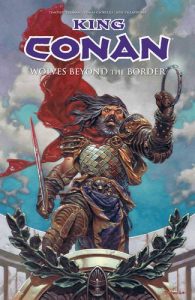 Before embracing the peace of the grave, time is the burden that all men and women must endure, and while fate determines the amount that each of us is given to spend, how wisely it is used by each of us is a matter of individual conscience. Conan determined to enjoy and make the most out of every second of his allotted days, never dreamed that he would live to feel the sting and doubt of old age, but he did and in Wolves Beyond the Border, he sits on the throne of Aquilonia as its King, his adventures seemingly a thing of the past. Like all of us who have felt, and begin to feel, the passage of time, Conan has become restless and as the story begins, has taken to disguising himself and venturing out into the most hellish of his capital cities taverns as a way of abating his black moods by revisiting the places he used to frequent before being weighed down by duty and position. It’s in these hidden alleyways and among these dens of ill-repute that his desire to once again re-live his past is fulfilled as he finds himself drawn into, partly as a puppet of great sorceries but mostly as a willing sword hand, a war for the hearts and minds of the Pict tribes, one that if lost, will endanger his own kingdom. And so, Conan once again becomes entangled in the convoluted affairs of witches, clan chiefs and would be kings, dancing to the tune that the gods insist on playing until blood must be spilled, scores settled and lands saved. Much like Conan’s previous adventures, the path that leads to the conclusion of Wolves Beyond the Border is mired in death, intrigue, monsters, dark magic and gore, all of which bathe and engulf a story that Robert E. Howard would have been proud to call his own.

Truman’s tale of an aging freebooter yearning to once more sample the pleasures of his youth and forget all about the trials and tribulations that responsibility has heaped upon his shoulders, will strike a particularly strong chord with all of those facing and entering the unknown vistas of middle age.  Expertly realised and brought into being, Conan has become someone that all of us who grew up reading his exploits can relate to. He may have been forged in the imagination of Robert E. Howard, but in his twilight years he’s been fleshed out and given purpose by Timothy Truman. While the plot retains the elements that his original creator sprinkled into his fables, it’s still an exciting and original story brought to life by the striking, breath taking and achingly beautiful world fashioning pencils, inks and colours of Giorella and Villarrubia. He may be older, and with every passing moment getting a little closer to finally sitting at the side of Crom, but this is still Conan, and he remains the stuff of myth and legend. Let Timothy Truman tell you of the days of high adventure…   Tim Cundle