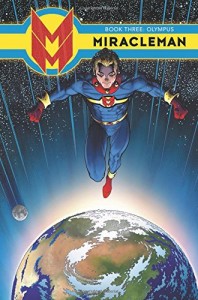 Miracleman: Book Three: Olympus – The Original Writer, John Totleben, Thomas Yeates, Steve Oliff & Joe Caramagna (Marvel / Panini)
Contrary to popular opinion, there are very few genii have emerged from the confines of the four colour universe, the word ‘genius’ having lost nearly all meaning through over-usage in the hallowed annals of fandom. Don’t get me wrong, it’s a medium filled with incredible, exciting, energetic writers and artists who imaginations seemingly know no boundaries, men and women whose talent is awe-inspiring and who’s tales regularly leave me in state of near nirvana, but genii? No, those are few and far between, and number at most, the same as the digits on both of your hands, and when you do stumble across their work, it’s presence, power and passion sets it apart from just about everything else you’ve read, or will read, lingering in that place between consciousness and dreams long after you’ve finished the final page, closed the book and set it aside. ‘Miracleman’ is one of those books, or rather, in its new collected format, three of those books, ‘Olympus’ being the final part of the trilogy. The author, who I’m sure you all know, due to a long-standing argument with the publisher had his name removed from the title, preferring to go by the sobriquet ‘The Original Writer’ for this release, has long been regarded as genius in his field, and he is, I’m sure you’ll be happy to know, one of the ten who I acknowledge as being just that. A genius. And his genius shows itself in every panel, and on every page of ‘Olympus’ as his deconstruction of super-hero mythology, and fable of the place such beings would have in society reaches its climax.

Breath-taking in its scope and literary accomplishment (and the art isn’t too bad either, in fact it’s pretty darn spectacular, Mr Totleben take a thoroughly deserved and well-earned bow), ‘Miracleman’ follows our hero in the final throes of his apotheosis, as he transforms from man-made hero to deity, and his journey complete, is left to gaze out over the mortals from whose ranks he emerged. In ‘Olympus’, Adam finally meets his Eve, Miraclewoman emerging from the shadows to aid him in understanding the universal complexities of where his power actually comes from, as they journey to the stars to discover the truth about themselves and assume their, and Earth’s, position in the ancient stalemate that exists between two aeon old empires. Upon their return, Miracleman finally gives up his humanity when his wife and child leave him, the former for some semblance of a normal life, and the latter because she has outgrown the world around her, before facing his true nemesis in a long over-due confrontation, the tragic fallout from which exposes him and those like him to every living person on the planet, changing the everyday reality of life forever as gods and men exist next to each other in a “utopia” that feels suffocating, almost too perfect and more than a little totalitarian. Told in flashback by a being who is gradually losing his humanity and his connection to the woman he loved and his fellow man, and thus everything that made him who he was, that the writer’s genius shines brightly, as Miracleman’s story is cold and distant, and yet all too human and engaging, and in the final portrait of the society crafted by these “new gods”, the writer gently exposes the kingdom that these “deities” have created and now rule over. ‘Olympus’ is an incredible story, exploring and questioning faith, power, mortality and humanity and the role that each plays in universal and individual destiny, while expanding upon, and examining the actuality (in graphic horror and detail) of what it would mean to live in a world with super-heroes and villains. It is, quite simply, a work of genius… Tim Mass Movement