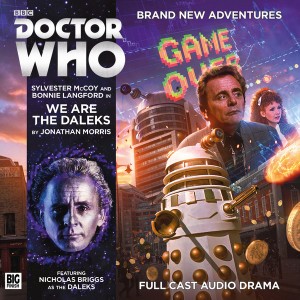 Doctor Who: We Are the Daleks – Starring Sylvester McCoy, Bonnie Langford, Kirstie Besterman, Angus Wright, Mary Conlon, Robbie Stevens, Ashely Zhangazha, Lizzie Roper, Dominic Thornburn & Nicholas Briggs & Written by Jonathan Morris – 2xCD / Download (Big Finish)
Given the title of the Seventh Doctor’s latest adventure, the identity of his adversaries isn’t exactly a mystery, but that said, I don’t think that there’s a single fan of the Doctor who doesn’t get more than a little excited when he faces arguably, his most infamous adversary, the Daleks. Landing in London in 1987 with Mel on board the Tardis, it doesn’t take our heroic duo long to discover that there’s something seriously wrong, as the headquarters of a new global company, the Zenos Corporation, looks surprisingly familiar. Determined to find out what’s happened, The Doctor and Mel begin to investigate, the former in his own indomitable way and the latter by inveigling a position in the Zenos IT department, and before you can say ‘Exterminate’, they stumble across the sons of Skaro’s latest scheme to conquer the Universe: through investment, financial influence, the creation of a new galactic free market, commerce and trade. But as with everything the Daleks do, looks are more than a little deceiving, and the deeper the Doctor and Mel dig, the closer they get to the terrible truth in a tale involving a wonderful new communal, online (before the advent of the internet) game, political power plays, space battles and rescue missions that catapults the Doctor from Earth too Skaro and back again as they attempt to thwart the Dalek’s latest invidious venture.

“We Are the Daleks’ is a ridiculously quickly paced, action filled romp, that also happens to be an intelligent, sharp and darkly comedic pastiche of the social conventions, attitudes and prevailing ideas of the late eighties, with greed and profit, instead of the usual Dalek tropes (that is death, destruction and annihilation) taking central stage for most of the drama. It feels like a classic Seventh Doctor story, and while listening to it, even though it’s completely different, I couldn’t help but be reminded of ‘Remembrance of the Daleks’, but if you asked me why, I couldn’t for the life of me identify or pinpoint a single reason why it did. But as we all know, that’s more a cause for celebration than commiseration, and as it features a fantastic cast who sound like they’re pouring their all into the engrossing, inventive and widely imaginative story, ‘We Are the Daleks’ proves there’s nothing more entertaining in the Whoniverse than a couple of age old adversaries going head to head with the fate of Earth, and the galaxy, at stake. Absolutely smashing… Tim Mass Movement