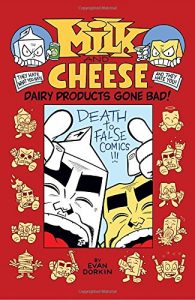 Comics used to the medium of choice for the dispossessed, the disenfranchised and those of us with, due to being a little different, a penchant for things that didn’t fit in with the societal norm and a disdain of mainstream culture. At least, they were when I was growing up and I know this because I, like so many of my peers, felt the sting of rejection at an early age as the “normals” castigated, and afterward ignored, me, which while humiliating and painful at first, became a badge of honour that I wore with pride when I entered my teenage years. The way I saw it was, if they wanted to try and make me into some sort of pariah, then to Hell with them, I’d carry on doing what I was doing what I was doing and being who I was and if they didn’t like, well they could all just go fuck themselves. And I guess that Evan Dorkin must have gone through a similar rite of passage, and I suspect it was that that led in no small part to his creating Milk and Cheese, the slightly less than dynamic, alcoholic dairy product duo who rip, rend, tear and rampage their way through New York and the US of A and while doing so lampoon society and it’s self-obsessed failings and blinkered version of what it considered, and considers, to be cool, hip and happening.

Using satire as a razor sharp weapon and his uber-violent creations as vessel for pointing out the mediocrity of everyday life while accepting that everyone and everything is fundamentally flawed, Dorkin, in Mile and Cheese, trashes both society as a whole and makes fun of the insular world of fandom.  Righteously funny and at times slightly outrageous, Milk and Cheese picked up where The Fabulous Furry Freak Brothers and their counter culture ilk left off, and supercharged the war on everything and anything with two fists full of hate, a rabid dose of cynicism and a more than healthy level of contempt for the constraints imposed arbitrarily by every facet of life. While it’s hideously clever, insightful and hugely self-deprecating, the best thing about Milk and Cheese, is that it was, and still is, one of the funniest comics to have ever emerged from the underground tradition. And when I say funny, I mean proper from the gut, doubled over, guffawing until you’re fit to burst, laugh out loud funny. Collecting every little bit of the malcontented pair’s two decade history in a single volume, Milk and Cheese: Dairy Products Gone Bad isn’t just a book that you want, it’s one that you need. Bring on the beer and bring on the violence, I need some gin… Tim Cundle