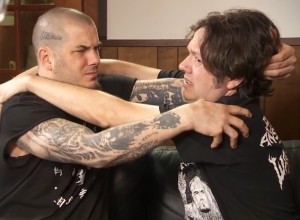 The Metal Grasshopper series continues and Episode 5 offers a “Vulgar Display of Feelings” as Philip H. Anselmo agrees to undergo group counseling with delusional manchild, Dave Hill, in an effort to rescue the goat that also happens to be Anselmo’s grandmother. There’s not a dry seat in the house as Dr. Joe Randazzo aids Anselmo and Hill in an exploration of their feelings.

Scroll on over to Metal Injection to watch Metal Grasshopper Episode 5: “Vulgar Display of Feelings,” with the whole damn family at THIS LOCATION. While you’re there, catch your lazy ass up on the last four chapters”

Episode 4: “Unscared” – Anselmo lets Hill loose on an unsuspecting public, where he meets an actual woman. Anselmo also schools Hill on stage banter, corpse paint, and other important topics. Later Anselmo and Hill get in a huge argument from which they may never recover!