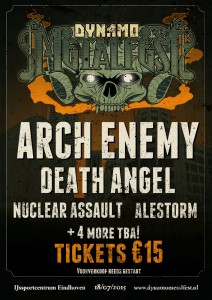 “We are very pleased with the addition of our headliner Arch Enemy. Two weeks ago the band played a sold out show at the 013 in Tilburg, which shows that they’re more than worthy of a headline slot with us.” said Tjerk Maas, organiser of Dynamo Metalfest. “The beauty of Arch Enemy is that they appeal to both the older metal fans as well as the young generation – we welcome both groups to Dynamo Metalfest.”

Formed by mastermind, Michael Amott – upon his departure from death metal band, Carcass – Arch Enemy have been around since the mid-nineties. With Carcass, Amott was instrumental in creating sweeping guitar solos and melodic hooks, something he further perfected with Arch Enemy. This year, to accompany the release of new album War Eternal, the band injected some new flesh and blood, with the additions of Alissa White-Gluz as their new vocalist and former Nevermore guitarist, Jeff Loomis.

In addition to the four bands already announced, four more will be unveiled in the new year.