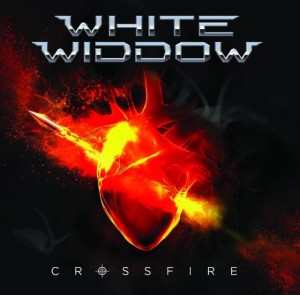 White Widdow – Crossfire CD (AOR Heaven)
Now here’s an album that reeks of classic 80’s arena rock – Dokken, Night Ranger, Giuffria… to name just a trio. Australia’s White Widdow mix up swirling keyboards amongst sharp, poignant, fretwork; along with huge choruses and plentiful hooks. The big polished sounds and deep melodies of ‘Below The Belt’ become a perfect mix combined with the keyboard driven melodic rock of ‘Dreams Don’t Die’ – this stuff is commercially accessible rock music at its unsurpassed. MTV would have loved White Widdow, and ‘Carry On The Heartache’ would easily sit comfortably on Def Leppard’s ‘Hysteria’. For those looking for a slightly tougher edge ‘Crossfire’ does carry some hard rock connotations, and none more so than on ‘Caught In The Crossfire’ as it’s powerful undertow races away. Had White Widdow been around in the 80’s they would be as big as many of their luminaries. Mark Freebase