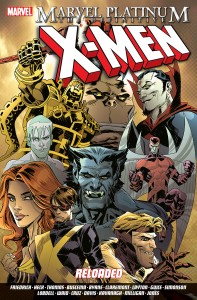 Even in a Universe as diverse and rich in the mysterious, strange, fantastic and arcane as the four colour one, an all too scarce few of the heroes, heroines and villains whose lives fill the pages of its chronicles, become icons. The minority who do, who surpass the boundaries of fandom, venture into mainstream consciousness and capture a sliver of the popular zeitgeist are, more often than not, even more extraordinary than their astounding and astonishing peers.  And as far as weird and wonderful are concerned, they don’t get any weirder or more wonderful than the Children of the Atom, the X-Men. Born in an age that lived in constant fear of nuclear warfare, one terrified by the devastating effects of radiation and the mutants that would supposedly rise from the ashes of bomb after being been reborn in the fires of atomic annihilation, the X-Men have long since transcended their somewhat humble literary beginnings and have become a global phenomenon. Which for a book that continuously teetered on the edge of cancellation for most of the late sixties and early seventies, isn’t too bad. In fact, their journey from nearly-rans to super-stardom has been nothing less than incredible, and The Definitive X-Men Reloaded captures some of the moments (believe me, it would be nigh on impossible to trap them all in a single book, as it would weigh more than the average family car and would span at least three thousand pages) that made their odyssey possible.

Focusing on the more famous Phoenix and Apocalypse sagas, Reloaded begins by introducing the audience to the core X-Men tension: that although hated by humanity, our heroes fight for us humans against their own, led by Magneto and his wholehearted belief in mutant supremacy.  Here, our eponymous heroes battle Magneto with a little help from the Avengers, and as opening chapters go, it’s a great choice as it familiarises new readers with the prose and art styles that are inherent to the X-Men. While the writers and artists may change, the style of the book hasn’t really altered all that much over the years, maintaining its dialogue heavy, beautifully detailed artwork, action heavy, thought-provoking and involving stories and compelling, engaging characters.  From then on the reader is plunged into a balanced, enjoyable maelstrom of mythology, canonicity and lore as Charles Xavier’s students fight for one of their own against galactic empires; form a new team when their “day” is done; and face, arguably, their greatest nemesis, Apocalypse, in some of their most pulse pounding, adrenaline pumping encounters. Saving the Earth? They do that. Changing timelines and altering the course of history in alternate futures? Yeah, they do that too and so much more in this riveting, endlessly readable collection. And you know what? It even includes stories by two of, in my humble opinion, the greatest X-Men writers to have ever put pen to paper and planned the destinies of their charges, Mark Waid (who on this occasion, is teamed up with fellow scribe Scott Lobdell) and Chris Claremont. Believe me folks, it doesn’t get much better than this, so what are you waiting for? Dive in and experience the wonder of super-powered, mutated adventure.  Welcome to the age of the atom…  Tim Mass Movement