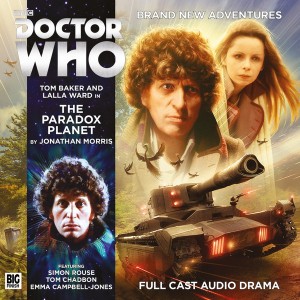 Despite the fact that the Doctor has spent centuries travelling through the time vortex, the number of incidents that have affected the Tardis while in flight have been few and far between. So, when another ship collides with it, and in the brief moment that it occupies the same special and temporal location as the Tardis, ends up whisking Romana away with it, the Doctor, following his initial disbelief is propelled into an immediate flurry of activity and sets off in pursuit of the alien vessel that ‘kidnapped’ his friend. It’s the beginning of strange, unpredictable and uncommon adventure that finds the Doctor and Romana at the opposite ends of a time war, one being waged by a species fighting itself, as ancestors and descendants battle each other for the “future” of their world and their own survival. Fought across a millennia, with one side based at its dawn and the other at its cusp, it’s a conflict that, like all others, thrives on and is driven by the absolute belief of the participants – those in the future and those in the past – who remain unswerving in the “rightness” of their cause.  But the longer that the Doctor and Romana spend in their respective time periods, while desperately trying to escape and find each other, the more they discover that folly and fault are shared equally by all involved, and that unless they do something to try and help, which they are forced into doing by circumstance and fate, then the “time war” that they’ve become entangled in will only end one way. In mutually assured destruction.

The Paradox Planet is a carefully, and cleverly, woven epic that incorporates civil war into the fantastical notion of a world fighting invaders from the future while desperately trying to change its past. Every Whovian is, by now, more than familiar with the idea of the Time War, but Jonathan Morris questions the concept of it being a singular event and follows the old adage that if it’s happened once, it can happen again. By utilising the premise in a different environment and setting – a race fighting itself – he’s able, to probe and delve into the minutia of what a war like that would entail for those caught in it’s almost inescapable grasp and the world they call home.  Mirroring the environmental crisis that humanity is facing, and has also created, and with the aid of a spectacular cast, excellent characterisation and a wonderful ‘Wizard Of Oz’ influenced sub-plot, The Paradox Planet is a fantastic first act in a two part story. If the opening half is this good, I can’t wait to hear the conclusion… Tim Mass Movement