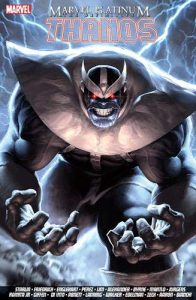 Thanks to wiping out most of the Avengers and a whole load of other folks on the big screen, Thanos is now the biggest, baddest villain in Superheroville. His infamy has spread beyond the confines of fandom and has become part of the mainstream consciousness and his name dwells and exists in all the quiet places populated by people who less than a decade ago couldn’t have cared less about caped crusaders and meglomanical tyrants. Thanos has, following his act of supreme logical barbarity that was writ large upon the imagination of millions, finally arrived. But unlike so many of his two dimensional contemporaries, the Mad Titan has a plan and a purpose that doesn’t just involve gratuitous carnage and the Universe bowing before him. He has vision and while he, like so many other would be despots, is more than a little fond of power and all the trappings that come with it, he was never motivated solely by a desire to reign supreme. His goal was always far more pure, as he was driven the thing that has been both the downfall and salvation of legions before him; love. Granted, it’s a love of death (or more accurately, it’s embodiment, Lady Death) which is more than a little twisted and insane, but as my old Gran used to say, it takes all sorts to make the world, or in Thanos’ case the Cosmos, go round. In short, he’s far from being your average monologueing baddie of the hour and is, all things considered, quite the complicated villain. And The Definitive Thanos attempt to get to grips with its subject by presenting a collection of his “greatest hits” which illustrate his highs and lows and paint him in a not entirely unsympathetic light.

Consumed by his passion for Death and his need to be worthy of her affection, throughout his history Thanos’ desire to stand by her side as an equal has seen him unleash wave after wave of punishing devastation upon galaxy after galaxy, resulting in the deaths of billions of innocents. Inevitably, this has led to numerous battles with the heroes charged with protecting the Universe from creatures like the Mad Titan, and in The Definitive Thanos, his schemes, plots and plans bring him into conflict with Thor, Drax the Destroyer, Captain Marvel and the Silver Surfer. Whilst those various encounters between cosmically powered individuals are fantastic in their own right, it’s the final quarter of the book in which having been betrayed by his son and his one true love and left to die a slow, lingering and lonely death as a prisoner on his home world, where Thanos really shines. Hs fate mirroring the plight of Edmond Dantes, Thanos undergoes a transformation and the gradual personal evolution that’s been slowly chipping away at his character since Jim Starlin first introduced him to the Marvel Universe forty five years ago, starts to take effect. It’s here that Thanos at long last becomes the creature that he was always meant to be and begins the long ascent to the thing that all of the heroes in the Marvel Universe fear the most, his almost inevitable victory over every other living thing. With a staggering list of talent responsible for guiding Thanos on his incredible destiny, and bringing it to life in these pages, it’s nearly impossible to sing the praises of any individual story, writer or artist; except for Jim Starlin. See, in Jim’s hands Thanos becomes a boiling force of nature, a rampaging, dark hearted beast whose power is equalled only by his intellect and it’s in Jim’s hands that Thanos begins to fulfil his potential, because just like Victor Frankenstein did, Jim understands his monster in a way that no-one else possibly can.  It’s time to meet the greatest monster of all. It’s time to meet Thanos… Tim Cundle