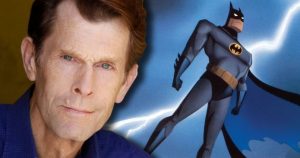 Kevin Conroy, best known for Batman: The Animated Series, Batman: The Killing Joke and the Arkham video games, is set to play a special guest star character with a dark past called Bobby ‘Shakespeare’ Smith, who has a run-in with the show’s Northern English vigilante ‘The Rogue Detective’ played by co-creator of The Few, Sam Benjamin (Peaky Blinders, JLA). He joins a cast of rising British talent including actors from Peaky Blinders, Game of Thrones, Hollyoaks, Coronation Street, The War of the Worlds, Transformers and Wonder Woman.

Creator and star Sam Benjamin, who also filmed a role with Zack Snyder on Justice League, commented, “We are beyond excited to have Kevin Conroy joining our cast. He is an icon in the comic book genre. I grew up being inspired by Kevin’s performances, watching him every Saturday morning in my Dad’s tiny little flat up in Merseyside”.

“To many fans he’s regarded as the greatest Batman but more importantly, he is one of the most talented actors of an entire generation. We are honoured to have him want to jump into a live action role for our series The Few: Dark Future”.

Director Sam Bradford added: “Costumed crime fighters with super-powers are largely grounded in American literature. Not only is casting Kevin a great move because he’s a phenomenal performer, it is also an impactful and interesting way of nodding to this US heritage of the genre, while telling a very British tale”.

The Few: Dark Future was born out of Benjamin & Bradford’s frustration at British networks and channels reluctance to create more shows and movies in the superhero genre so they created a mini web series on a shoestring budget last year. This time with their IndieGogo, they want to create a bigger, meatier and more epic season.

Benjamin: “There’s nothing else like THE FEW being made right now. We are huge fans of American comic books and super-hero shows, but we want to tell a very British working class story about loss, identity and justice . The UK deserves to have a unique super-powered universe of its own!”