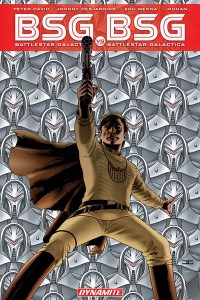 Well this is just sheer indulgence. Battlestar Galactica vs. Battlestar Galactic is one of those fan boy dreams. Like when Batman and Superman first crossed paths or Alien and Predator had intergalactic beef. The what if’s and possibilities of such a crossover are now being realized. You want see Commander Adama from 1978’s crew face off with William Adama from the 2003 series? You got it. Starbuck vs. Starbuck? Alrighty then! Dynamite has been producing BSG comics since 2005 and as such were perfectly placed to make this time defying collaboration a reality.

Any impressions that this could be an amicable meeting are quickly blown away, with both crews suspicious of each other and clueless as to why time has thrust them together. With distrust growing the only thing they know is that it involves the discovery of Kali, the last of the creatures that created the dreaded Cylons and the wormhole that has thrown them together has more surprises up its sleeve. With an epic battle brewing, will the crews destroy be able to unite or will they end up destroying each other

Written by Peter David, whose twelve year run on The Incredible Hulk bagged him several awards, this series feels like a truly unique piece of writing and it’s something that we’re not likely to see again. Collecting all six books in the series, the action is thick and fast and the storyline is such that you daren’t take your attention away from it for a second as it keeps you guessing right up until the last moment. Utterly enthralling… Chris Andrews