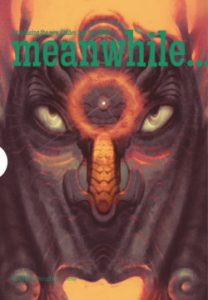 The first comics I remember reading when I was a nipper always featured multiple, mostly on-going, stories based around different characters, themes and settings. It was an immersive experience that focused on world building and offered its readers a seemingly endless variety of stories; and I loved it. So much so, that the comic I most associate with that format, 2000AD, is, nearly forty years after I first discovered it, still part of my regular literary diet. My slavish devotion to this facet of comics probably explains why I adore Meanwhile…, the book that I’ve come to regard as being the UK’s premiere comics anthology, and this latest issue only reinforces my belief that it belongs at the peak of the comics mountain.

While regular strips The Bad Bad Place, The Collector and Gail Key’s Psychic Lost Items Helpline, continue at an unabated, intriguing pace with their must read offerings of Lovecraftian horror, chilling Victorian supernatural pseudo-science fiction and Hitchcock-style thrills, unfortunately this issue also includes the final part of the compulsive dystopian fantasy, The Needleman, which concludes in grand fashion and leaves the door open for, hopefully, further forays into this frighteningly realistic world. And while all of the aforementioned and the numerous other all-too brief tales included in this chapter of Meanwhile… are more than worthy of a couple of hours of anyone’s time, this issue really belongs to Frazer Irving’s visit to Strangehaven which offers a potted history of Atlantis as told by a most unexpected narrator and Heliox, Elizabeth Hart Bergstrom and Terry Eden’s oddly comforting and beautifully inventive exploration of the all-too familiar childhood trauma of being forced to confront the unknown head-on. Forward thinking and unafraid of exploring new and sometimes challenging territory, Meanwhile… is a stunning showcase for some of the brightest voices in independent comics and continues to prove why it should be an essential part of every comic fans pull list. And if it’s not already on your list, you need to ask yourself why it isn’t and rectify that error as soon possible. Long may it reign… Tim Cundle