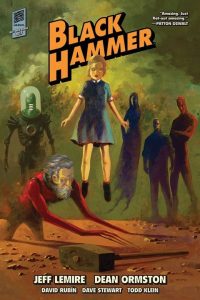 This month Dark Horse have seen fit to repackage, arguably my favourite comic book of 2016 and what should be- your new favorite book of 2018. Black Hammer. Before Black Hammer we’d seen washed up superheroes in Watchmen and Superman, but how about bored superheroes, living out a menial existence on an old farm. Doesn’t quite sound like the type of book you’d instantly want to pick up right? Well throw in the fact that this farm may just be something like you’d find in an episode of the Twilight Zone and give it one hell of a back story, the result was, what turned out to be an excellent new series from D.C and Marvel stalwart Jeff Lemire.

Growing ever more frustrated knocking about their timeless farm the former saviors of Spiral City- Golden Gail , Abraham Slam, Colonel Weird, Madame Dragonfly, and Barbalien have taken to passing the time with a spot of shoplifting(Gail), who by the way is trapped in the body of a nine year old and tinkering with a probe in the tool shed(Barbalien)But all the while there is a dogged reporter determined to find out what happened to Spiral’s heroes and something  big is brewing, which may see the heroes thrown back in to action at any moment. It all lends itself to an intriguing story, investigating what happened at Spiral City ten years ago and why the heroes find themselves trapped here.

Black Hammer has a wonderfully retro feel to it which dips in between Twin Peaks type small town weirdness and the classic 50’s sci fi alien sagas without so much as a flinch and having recently explored potential offshoots of Black Hammer in Doctor Star, it’s nice to see the source material get a makeover, with a hardback library edition complete with sketches and a bunch of cool extras. If the fat man in red happens to leave a copy of this in your stocking you should consider yourself very lucky… Chris Andrews