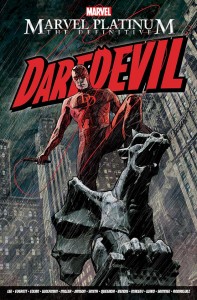 The Man Without Fear is, in the four colour universe, as much of a staple of the New York skyline as Spider-Man, The Fantastic Four and the Empire State Building. The defender of Hell’s Kitchen, blinded in an accident, which also granted him enhanced sensory powers, during childhood, Daredevil and his alter-ego, Matt Murdoch have waged a one man war on crime in all of its facets since he first donned his infamous horned costume.  Adopting the persona in order to pursue and punish his father’s murderers, his social conscience saw him continue his mission in an effort to “clean up” his neighbourhood and in a near five decade career, he’s seen the best and worst of humanity, fallen further than any man should ever have to, suffered the loss of loved ones, had his secret identity exposed, and witnessed another long established character “assume” his identity. All of the pain he’s endured, everything he’s sacrificed, all of it has served to make him more resolute in his devotion to his self-determined duty, and his adherence to his role has seen him become one of the most iconic characters in the Marvel Universe.

Every story has a beginning, and The Definitive Daredevil is no exception, opening with the tale of its hero’s origin. Unlike the debut of many of his peers, it’s grim, gritty and, oddly for a comic book, has a dark realism that immediately sets the tone for the path that its charismatic central character will venture down for the rest of his life. Following a costume change (from yellow and black to scarlet, the colour most commonly associated with the Devil, one designed to reinforce his persona and name through fear and association), Daredevil is back in business, and this rather weighty, splendid tome does exactly what it sets out to do, and shares some of old Horn Head’s seminal, defining moments with fans new and old alike. It charts his changing relationships with among others, Karen, Foggy and his nemesis, Kingpin, and how they alter his destiny and shape him as a man and a hero. Knowing all too well that the law and justice are two entirely different entities, Matt Murdoch always tried to maintain that separation in his own life, serving as a lawyer by day and a vigilante by night; but as his story progresses, the line between both becomes increasingly blurred and that self-imposed distance gradually begins to fade. His experiences in the fight against criminals and lawlessness in the courtroom and high above the streets forces him to undertake a dark journey, one that would break most men but one that he accepts almost willingly, as he understands its necessity if he’s to remain an effective force for, and avatar of, ‘good’. Daredevil is one of the most complicated and therefore interesting characters to have ever graced the pages of a comic book, and the stories contained in these pages are as much about the man behind the mask as they are the hero. You think you know all about the Devil of Hell’s Kitchen after watching the Netflix series? Think again buster, because the only way you’ll truly get to know him is by immersing yourself in The Definitive Daredevil.

Brutal, violent, chilling, action packed and filled with emotive, moving and dramatic storylines and eye popping, jaw dropping artwork, The Definitive Daredevil is impossible to put down, featuring as it does, the artists and writers who are widely acknowledged as being the best of the best as far as Daredevil is concerned. Frank Miller, Gene Colan, Mark Waid, Joe Quesada, Kevin Smith and many more, they’re all here, all present and correct with their noir infused tales of the crime infested dark alleyways that make up the concrete jungle known as the Big Apple, and the guardian “angel” who keeps its inhabitants safe. Beware the Devil, for once he gets his claws in you, there’s no escaping his magnificent embrace. Ferociously good… Tim Mass Movement