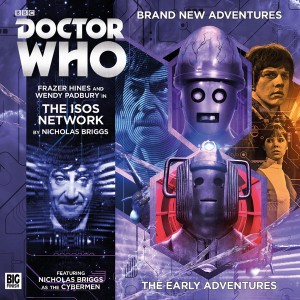 In the immediate aftermath of The Invasion, The Doctor, Jamie and Zoe spot a solitary Cyber ship fleeing Earth. In an effort to prevent it escaping and reporting why the planned conquest failed, they attempt to pursue it, but the Tardis being the Tardis and the Doctor being the Doctor, things don’t exactly go according to plan. Materialising near an apparently deserted city, they find themselves separated by their curiosity as they explore, and while each is left to their own devices, the Doctor and his friends soon realise that the Tardis hasn’t let them down, when they stumble across a hidden Cyber base. With each of them finding new allies, and after realising the terrible truth about the deserted city and where The Invasion was mounted from, they once again begin their struggle against the Cybermen, before being reunited in a final push against their cybernetic enemy.

The Isos Network is a thrilling and dramatic journey that transports its audience to the tail end of the sixties and the era of the Second Doctor. It’s a joy filled romp that incorporates so many wonderful ideas into its plot, you’ll find yourself playing it over and over again just to make sure that you didn’t miss something the last five times you listened to it. Giant alien monsters, intergalactic special forces and of course, the Cybermen are all fused into a genuinely creepy story. One that thanks to the setting, the haunting incidental music and the detail, dialogue and eerie mystery at the centre of the adventure, feels like it’s a missing serial from season six of the original show. Frazer Hines’ double act as both Jamie and the Doctor is simply incredible, and Wendy Padbury sounds exactly the same as she did more than forty five years ago, perfectly recreating the role of Zoe Heriot with consummate, confident and professional ease.  Positively dripping in, and oozing with, nostalgia, The Isos Network is everything that Doctor Who should be, that is fantastic, imaginative and fun. Outstanding…  Tim Mass Movement