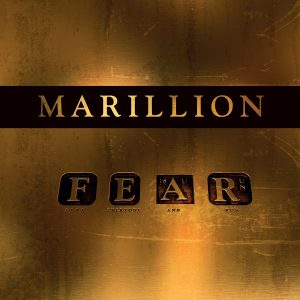 For a band that have been around for nearly forty years it is a testament to the sheer talent and creativity of Marillion that their latest album, number eighteen for anyone who’s counting, is one hell of a record. It is widely acknwoledged that the two best Marillion albums are Misplaced Childhood from 1985 featuring original vocalist Fish and 1994’s Brave which was current vocalist Steve Hogarth’s third outing with the band. However after listening to F.E.A.R it would be fair to say that Misplaced and Brave now have some serious company.

F.E.A.R is simply one of Marillion’s finest records to date and not to sell recent previous releases such as Sounds that Can’t be Made and Somewhere Else short, but F.E.A.R eclipses them dramatically. It is an album that typifies Marillion’s unique writing style with moments of darkness, light, melancholy and joy all thrown into the mix. With guitarist Steve Rothery’s mesmerising playing and keyboardist Mark Kelly’s fantastic synth hooks and samples propelling each track forward, the album only gets better with the rhythm section of bassist Pete Trewavas and drummer Ian Mosley with their impeccable tag team of dominating bass runs and flawless drum licks. Of course, let’s not forget frontman Steve Hogarth whose voice is sounding better than ever here. From all out rock to deep and soulful Steve’s vocal range is fantastic.

The songs on the album itself are an eclectic collection of tunes from the upbeat, infectious The Leavers 1: Wake up in Music, which could teach younger more contemporary bands like Coldplay a thing or two, to the foreboding harrowing The New Kings : F**k Everyone and Run, this is an album that refuses to conform to the mainstream and put a label on itself but at the same time is very accessible.

Marillion are a band that have on occasion been unfairly labelled as a has been prog band. That isn’t true, they’re not, they are simply Marillion, a band who always have and always will write and record the music they want and not concede to the Simon Cowell’s of the music industry just to get a single in the charts. Marillion are a band who march to their own beat and the results speak for themselves as every record they’ve ever released has been a labour of love and F.E.A.R is no exception. They are just as relevant today as they ever were, and this is an album that tells of the state of the world in today’s climate, one that’ll make you wake up and take notice without being a boring old protest album. It is an intelligent, entertaining, gripping roller coaster of a record and that’s as much as anyone could ever ask for or want…  Nath Rixon.