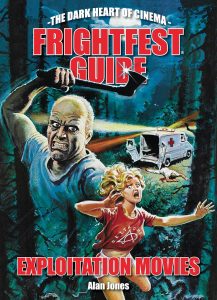 I am, by no means an expert or an authority on Exploitation Cinema and am at best, a somewhat enthusiastic neophyte, one who has been dipping his toes into its vast ocean now and then since the heyday of the video rental shop in the eighties. While not exactly passionate about the genre, I have, in my considerable time on spaceship Earth seen my fair share of lurid, low budget horror films and hack’n’slash extravaganza’s, but the sum total of my exploitation experiences are but a grain of sand in the desert when compared to those of author Alan Jones’. In The Frightfest Guide: Exploitation Movies, he takes his readers on a wild and uncompromising ride through the various sub-genres that make up the whole and some of their most infamous titles, briefly explores the history of Exploitation Cinema (which, it turns out, is inextricably linked to travelling Carnivals, Freakshows and Vaudeville) and then documents over two hundred of the “best” (or worst, depending on your point of view) films to have emerged from its shadowy embrace.

Written with passion and an unbridled enthusiasm for the subject matter, Jones isn’t afraid to share his opinions with his audience, and while his love of Exploitation Cinema in all of its many forms is apparent, his disdain for, and honesty in decrying some of it’s more sensational, ghastly and revolting children is not only refreshing, but it also makes the book as a whole, far more interesting than I ever thought it would be. After all, what would you rather?  A cold almanac of the subject that serves simply as a guide or  a witty, knowledgeable overview of the genre? Exactly, the latter wins every single time.  Informative, darkly humorous and filled with a plethora of interesting asides and historical facts, thanks to the inclusion of original quad and cinematic release posters, Frightfest Guide: Exploitation Movies looks every bit as good as it reads, and whether he’s talking about Bare Behind Bars, Reanimator, Zombie, Goliath and the Barbarians, Wild, Wild Planet or any of the other near two hundred entries, Jones book is never less than engaging and intriguing, and curiously compulsive. It may look like a coffee table book, but appearances can be deceptive and I defy anyone not to consume it in a single sitting. I fear my days as an Exploitation novice may soon be coming to an end, and that I am about to embark on a new journey as fully fledged fan of the genre. And it’s all Alan Jones’s fault… Tim Cundle