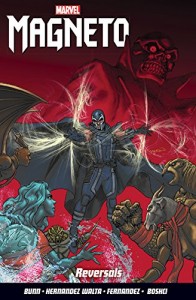 Magneto: Reversals – Cullen Bunn, Gabriel Hernandez Walta, Javier Fernandez (Marvel / Panini)
While I haven’t always been a huge fan of the X-Men, I’ve always had a rather grudging soft spot for Magneto. He exists somewhere between good and evil, his morality extending only as far as the well-being of his family and mutant-kind; doing whatever he needs to in order to ensure that both are safe, happy and given the same accord in society as the homo-sapiens he despises. Sometimes he walks with the angels and at others rules the pits of hell with an iron fist. As idealists go, Magneto is right up there, and unfortunately it’s just that blinkered idealism that has always caused me problems. Being -as he is – the ultimate product of his environment, Magneto’s stance was moulded by the horrors of the concentration camps and a vile Nazi agenda which makes incongruous the fact that his methods, ideas and drive have at times born disturbing similarities to the monsters who beat him into submission and forged his determination. It’s a small thing I know, but it’s always niggled away at me and while its grown fainter over time, it’s always been there. Until now.
Ever since Cullen Bunn took the reins, and stripped Erik Lensherr right back to basics and turned him to the bad-ass anti-hero that he’s become, the whole fascism thing hasn’t been an issue; because now, he’s like the Marvel version of ‘Sudden Impact’ era ‘Dirty Harry’, albeit one with a .44 and with the ability to manipulate metal on a small scale. The gritty noir feel of the story and dialogue, aided exponentially by the oddly period, and at times strangely claustrophobic but always visually stunning art of Walta, allows Magneto to take centre stage and inflict damage and punishment on those who’ve wronged homo-superior on a much smaller, but more intimately brutal scale, which lends the tale a much more immediate edge. When he smashes a gladiatorial ring in which his brothers and sisters were forced to fight for the amusement and profit of others, you don’t question his actions, and when he later confronts the Red Skull in the Genoshan Camps and is tortured beyond reason, you’re screaming at him to somehow get up and fight back however he can. And when he does, and his retaliation comes, you’re rooting for him every single step of the way, almost as much as you feel for him, during and after his reunion with his oldest friend, and his ‘almost’ change of heart. Haunted by his demons and fuelled by his anger and hatred, Magneto has finally become the black hearted hero I always hoped he would, and all it took was for him to be nearly stripped of his powers and the world to be turned upside down by the events of ‘AXIS’. Here’s to the villains, long may they reign… Tim Mass Movement