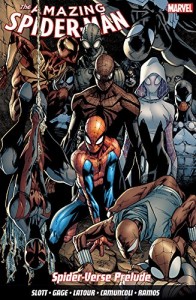 Amazing Spider-Man: Spider-Verse Prelude – Dan Slott, Christos Gage, Guiseppe Camuncoli, Humberto Ramos, Adam Kubert & Miguel Angel Sepulveda (Marvel / Panini)
Being arachnophobic, it’s always seemed a little strange to me that I’m such a die-hard Spider-Man fanatic and have been for the best part of more than three and some change decades, and if I had to pinpoint a reason for the psychological dichotomy that allows both elements of my psyche to function in tandem, then I’d have to blame Nicholas Hammond. If it hadn’t been for him, swinging on to cinema screens as Spider-Man in the late seventies, then I’d probably have been crippled by my over-whelming fear of the eight legged, eight eyed, fanged monsters who lurk, unbidden in the darkest recesses of our homes, only emerging to crawl over your face while you’re sleeping while drooling their poisonous saliva. But thanks to Nick, swinging (alright, look I know, his Spider-Man looks incredibly camp these days, but give me a break, I was six years old when he first sprang into action) across the New York skyline, I not only manage to “function” in everyday society instead of gibbering and muttering to myself behind closed doors, but as I’ve already said, when it comes to Spidey, I’m a bit of a fan-boy.

As you’d expect, given the title, ‘Spider-Verse Prelude’ is the warm-up act to the wall crawling event of the year, introducing all of the players in what’s set to be a Spider-powered smack-down of the highest quality. With Spider-Men from different realities and Earths falling victim to an all-powerful clan who feed on their life energies, it’s up to Otto (yes folks, The Superior Spider-Man is back, doing what he does best, annoying people and making sure that condescension is taken to new levels of homicide inducing rage), following his failed attempts to return from 2099 (don’t worry all is explained) and having discovered the feeding frenzy, to recruit an army of arachnid folks to defeat their new enemy. Which he does in grand fashion, pulling out all the stops, mainly though I suspect to save his skin, but partly due to his bizarre addiction to playing the hero. It’s a mission that he undertakes with a zeal and relish that’s quite uncommon for him, and as the spider deaths across the dimensions mount, Otto’s army slowly begins to grow, and the clock begins to countdown to ‘Spider-Verse’ .

Exciting, engaging and full of intriguing back-stories (on both sides), sharp story-telling, first rate dialogue and action, cornea popping artwork and the underlying humour that web-heads the world over have come to expect from Spider-Man books, ‘Spider-Verse Prelude’ is an incredible initial salvo in what promises to be something truly spectacular. If ‘Spider-Verse’ can maintain the momentum that this book has built and turns out to be half as good as it’s prelude, then folks, we’re in for one heck of treat. The gateway is open… Tim Mass Movement