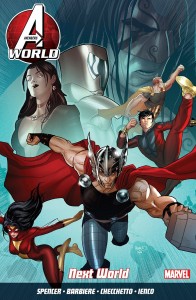 Avengers World: Next World – Nick Spencer, Marco Checchetto, Raffaele Ienco & Ramon Rosanas (Marvel / Panini)
Whether we want them to or not, all things must eventually come to an end and no matter how much we hope it will, nothing lasts forever. Not even The Avengers. Oh, I know that Marvel’s premier team will carry on in some form, the members may change and the line-up’s may alter, but it’ll always be The Avengers, but it won’t be my Avengers, and that’ll take some getting some used to. See, with everything that’s happened in the last twelve months in the Marvel Universe, Steve Rogers losing the abilities granted him by the super-soldier serum, whatever the heck it is going with The Hulk or Kluh or Doc Green or whatever he’s calling himself these days, The Illuminati and Iron Man’s involvement in that super-secretive-lets-shape-the-world-in-our-image-and-save-it-from-itself-and-everyone-else organisation and the events of AXIS, ‘Next World’ really does feel like the last hurrah for the “classic” line-up of the team. But you know what they say, if you’re going to go out, go out with bang and that’s exactly what they do in Nick Spencer’s cataclysmic of story of near world ending events.

Forced to fight on three fronts, and with the aid of the newly revealed S.P.E.A.R (the Chinese equivalent of S.H.I.E.L.D that comes complete with its own team of weird and wonderful superhero’s), The Avengers and S.H.I.E.L.D. finally take the fight to AIM and their future powered slew of “discoveries” and near invulnerability, the undead armies of Morgan Le Fay and an ancient (and huge) Dragon that just happens to be wearing Madripoor as its crown and is being controlled by Gorgon and The Hand. It’s an incredible showdown in which characterisation takes centre stage, seamlessly flowing between the back stories of the new hero’s and S.P.E.A.R’s history and the ongoing and all-consuming action that fills each and every beautifully rendered page, the plot fizzles and crackles with energy and the pace is explosively quick, brimming with blink and you’ll miss it moments and the Shang-Chi versus Dragon no holds barred, anything goes slobber-knocker of a fight is worth the price of admission alone. And just when you think it’s all over and your heart rate can finally drop below two hundred beats per minute, we’re introduced to a new team of Avenger, assembled for a very specific purpose in a post AXIS world that’s changed almost beyond recognition, a world in which one man hopes that he can begin to offset the weight of past misdeeds with one act of exceptional kindness and humanity, one act that will nearly cost the Earth to deliver, but one that might just make all the difference. You remember what I said about going out with a bang? That’s what they do, that’s all they could ever do, and that’s all we’d ever want them to do. So, if this really is the end for the “Classic” Avengers, let’s hear it for them one last time. Avengers… Assemble! Tim Mass Movement