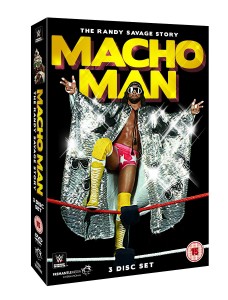 MACHO MAN: THE RANDY SAVAGE STORY (WWE DVD)
Now that Randy Savage’s wilderness years are over, and he has been restored to his rightful place in WWE history (including, later this year, getting his rightful place in the WWE Hall of Fame), it is only right that WWE release a thorough documentary looking at the life and career of one of the biggest superstars of WWE history.

Alongside Hulk Hogan and The Ultimate Warrior, no wrestler was more identifiable as synonymous with WWE (or, then, WWF) than Randy Savage. Indeed, as a child I used to sleep beneath a duvet illustrated with cartoons of those three men, and the first Wrestlemania main event I ever watched was Macho Man’s World Championship win against Ric Flair at Wrestlemania 8. The first wrestling event I ever saw was Summerslam ’91, featuring the marriage of Randy Savage to the Lovely Elizabeth. And when WWE made its historic, one and only overseas edition of its Summerslam franchise, it was a main event of the Ultimate Warrior versus the Macho Man which got me even more excited than hometown hero, Davy Boy Smith fighting Bret Hart in one of the greatest intercontinental championship matches of all time.

Savage was impossible to ignore – flamboyant colours, unique entrance music, those crazy sunglasses and the distinct gravelly growl in which he spoke those veering and intense promos. Yet something happened after he left WWE for WCW and, for some reasons – there are odd, unconfirmed rumours online – Savage was on the Vince McMahon blacklist, his name expunged from WWE history. As WWE mined its archives for retrospectives on the likes of Dusty Rhodes, Ric Flair, Billy Graham, and even The Ultimate Warrior and Bret Hart (two fellow blacklisters), a Savage bio was conspicuously absent.

Happily, all that changed a few years ago with the Macho Madness collection, and the inclusion of Savage in the WWE video games. For whatever reason, the legacy of Randy Savage was being restored (possibly CM Punk’s weekly homage elbow drop had something to do with it?), but there was still no biography. Until now.

The Randy Savage Story is exactly that – a fantastic feature-length documentary about the life and times of Randy Savage, his early years in baseball, his start in the wrestling business, his successes and pivotal roles at Wrestlemania III, IV, V, VII and VIII, the sudden demotion to commentary, the departure for WCW and resurrection of his in-ring career, and his tragic untimely end. Including talking head footage from his brother and other family members, as well as the wrestlers who knew him, this is a thorough tale of Macho Man’s career highlights and lowlights (they even vaguely cover the mystery of his WWE banishment…vaguely…). Alone, it would be sufficient to warrant handing over your money, but there are two other discs here as well, and they too offer something that no fan of the Macho Man would want to be without. Considering the five-star previous release, Macho Madness contained all the “best” Randy Savage matches, I was intrigued to see what bouts this new collection would boast, and WWE have done well to dig deep into the archives and produce a selection of hidden gems. While we have all seen the Wrestlemania III classic between Savage and Ricky Steamboat (a bout which still stands up to repeated viewings even now!), we now get to see the earlier encounter which began it all, from Superstars in 1986, and a trial-run for ‘Mania from the Maple Leaf Gardens in February 1987. Similarly, we get the pleasure here of seeing the rowdy rematch from Wrestlemania V just a few days later, as Savage battles Hulk Hogan at New York’s Madison Square Garden, or from Wrestlemania VIII as we get the Prime Time Wrestling version of Savage versus Flair. Throughout the remaining two discs we get buried classics between Randy Savage and the top tier of professional wrestling’s greatest: Harley Race, Shawn Michaels, Ted Dibiase, Bruno Sammartino, Roddy Piper, and Arn Anderson. We even get the aforementioned Summerslam ’92 match between Savage and The Ultimate Warrior. Due to Savage’s unique energy and unparallell in-ring ability, there isn’t a single match here that isn’t worth watching. If you don’t know who Randy Savage is, get yourself an education with this superb release. If you already know, sit back and enjoy remembering all over again why there was no-one quite like the Macho Man. Should you buy it? Oooh yeah! Dan McKee