Warning: preg_match() expects parameter 2 to be string, object given in /var/www/vip4/sites/vip6102689/httpd/htdocs/wp-includes/formatting.php on line 4866
 The Attitude Era Vol.2 - Mass Movement
x
Spread the love 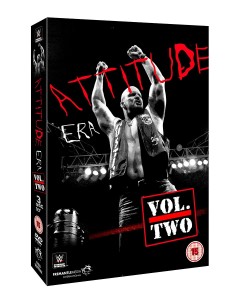 The Attitude Era Vol.2 (WWE DVD)
Considering the “Attitude Era” of WWE was the most profitable and creatively fulfilling time in the company’s history, it remains a mystery to me why they persist with the PG product of today. However, despite being my favourite period of WWE programming, even I – a rabid fan – am getting bored to tears of the constant futile nostalgia from the company for this golden age they refuse to return to. We have, of course, already had The Attitude Era volume 1, and WWE 2K13, the video game which set several of its matches and superstars in the Attitude Era. And then there are the endless clips on WWE TV – Top 5 this, Top 10 that, usually involving Stone Cold’s feud with Vince McMahon and the infamous Monday Night War.

My fear when this DVD came through the door, was that this would be yet another piece of boring self-congratulation, going through all the greatest hits of that bygone time that we’ve seen a zillion times: Austin/McMahon; the time Mick Foley fell from the cell; Mark Henry giving birth to a hand; The Rock saying “pie”; D-X invading WCW; Triple H ruining Test and Stephanie McMahon’s marriage; Dude Love; Mike Tyson; Brawl For All… But I forget – they already did all that on Volume One! With Volume 2 we get well into the deep cuts of the Attitude Era and I must say the results are utterly captivating, reminding me why this particular era of WWE programming was so special.

The focus here, rather than on the last collection, is not on documentary. That story has already been told. Nor is it on re-living the obvious. Instead of treading old ground we have a collection of obscure but representative matches celebrating the quirky in-ring product of this phenomenal period, accompanied by interesting talking-head vignettes focusing on particular areas of insider knowledge and folklore (how did Charles Wright develop his Godfather character? How cold was The Brood’s bloodbath? Where did Jerry Lawler get his cries of “puppies!” from, etc…)

Gems on the collection include a clinic from Shawn Michaels and Owen Hart, a raucous tag-team match between the New Age Outlaws and Cactus Jack and Chainsaw Charlie, a Boot Camp Match between Al Snow and Sergeant Slaughter, an early encounter between the Hardy Boyz and Edge and Christian from a Shotgun Saturday Night, a scintillating triple threat between Kurt Angle, Tazz and Chris Jericho, and a lost classic between Eddie Guerrero and Dean Malenko from Sunday Night Heat, but every match on the three disc collection has its place in representing this wild and crazy time in WWE history and is a fantastic catalogue of what was going on at that time beyond the over highlighted main events.

Of course, some parts of history are better left buried and forgotten. I don’t know what it says about WWE’s cultural sensitivity that they chose, in 2014, to remind us of D-X’s incredibly racist Pakistani accents as they “take New York” in a series of unfunny vignettes? And the preponderance of Bikini matches and references to The Godfather’s “’hos” (“they’re not women, JR, they’re Hos!”) remind us how far the Divas division has come (indeed, we see the evolution of this on the collection as Lita joins the fray and a strong three-way for the Women’s Title between her, Jacqueline and Ivory is included). However, even these moments remind us how edgy and provocative WWE was in the late nineties and early 2000s, and across the three discs we hear adult references to sex (“what does everybody want?” “HEAD!”), we hear swearing (now beeped), and we see blood (thatnks to The Brood, not all of it real!) and we are reminded that once upon a time, WWE had a programme which, though offensive to some, appealed to an adult demographic rather than a children’s demographic. We had crowds of adults cheering for a working class Steve Austin lacking the smack down on his boss, Vince McMahon, we had the Acolyte Protection Agency smoking and drinking and playing cards after a hard day’s protecting, and when people fought it was with violence and intensity that made us believe. During that time, WWE went through its biggest boom period, and since dropping the Attitude in the mid 2000s, viewership has declined and many of the fans enjoying the Attitude era have moved on to UFC – another product enjoying a current boom because it targets adults with lots of disposable income.

This collection is fantastic, as was the previous Attitude Era collection, and the Attitude Era video game, and all the Attitude Era clips and content that proliferate WWE DVDs, the WWE Network and WWE merchandise. There is no question that you should buy it – I couldn’t recommend it more highly. The only question that remains is why WWE aren’t waking up to the fact that there is a whole audience out there hungry for a return to this sort of product, and getting increasingly tired of having to re-live something on DVD that was highly successful, incredibly fun and, for unknown reasons, is never coming back. Dan McKee