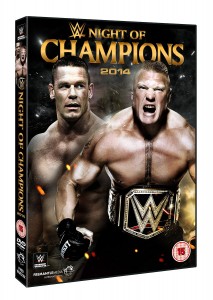 WWE NIGHT OF CHAMPIONS 2014 (WWE DVD)
Night of Champions is a WWE pay-per-view whose annual success is contingent upon the sheen and prestige of each of the company’s titles at the time of year that it rolls around. The equation is simple: this is an event where every single WWE title is on the line. Therefore, if we care what happens with each title, we care what happens in each match. If the title has lost its relevancy, then so has the match. In 2014, we were blessed largely with the former: opening Tag Team Championship match pitting The Usos against Goldust and his newly deranged brother, Stardust was compelling, as the new transformation of Cody Rhodes seemed promising and The Usos were in the midst of a career ascendency, producing thrilling matches and captivating crowds (when they said “Uce”, we said “O!”); the Intercontinental Title match benefitted from the comedic new development of The Miz’s “stunt double”, Damien Mizdow, being set against champion, Dolph Ziggler’s stunt double, R-Ziggler outside the ring, adding a little extra sizzle to their already stellar steak; the Divas Title had been helped along by some cracking matches between AJ Lee and Paige – possibly finding the need to out-do the outstanding competition from the woman’s division in NXT – and the addition of Nikki Bella to the mix; and Brock Lesnar, as his advocate Paul Heyman is always keen to tell us, is a “must see, once in a lifetime performer”. Any match involving Brock Lesnar – even yet another match against John Cena – elevates a card, and this one, following on from the unsurpassed beat-down of Cena by Lesnar at Summerslam, was full of intrigue: if Lesnar dominated Cena again, would it mean the end of John Cena for good?

That said – with four high calibre title matches to get us salivating, the rest of Night of Champions was not so gripping on paper. Sheamus as United States Champion was a flop, and his match against Cesaro – a man who has done nothing of note on WWE pay-per-view since Wrestlemania XXX – gave little expectation of greatness. And no-one makes me grab the remote and press fast-forward more than Mark Henry. His faux-patriotic jingoistic blather about Russia and America offered little to care about in his encounter with Rusev , and it is largely pointless watching any match with Rusev at the moment, when we know WWE is keeping him undefeated until he battles John Cena – an open booking idea which makes every match between now and then that Rusev participates in a boring forgone conclusion. Meanwhile, Roman Reigns fighting his old Shield partner, Seth (not Henry) Rollins was set to be an exciting new development in the destruction of the Shield, but a legitimate medical emergency – incarcerated hernia – meant Reigns was rushed to hospital before the show and had to forfeit the match. Though it is always good to see crazy old Dean Ambrose roll up in a taxi cab and raise hell to kill time, this ultimately felt like filler. And in the longest match of the night, Chris Jericho faced Randy Orton for perhaps the thousandth time in their careers.

The main problem for me with those last three matches is that they had nothing to do with champions. The whole point of Night of Champions is that it is about champions. Granted, since dropping the two separate World Title belts (which I congratulate), that made one less title to defend at this event, but I still think everything on the card needs to have championship implications, even if it isn’t directly a title match. How hard would it be for the non-title matches to be fights to determine the next number one contender? Or a battle royal to get a shot against the champion of your choice? Hell, it might even be worth combining NOC with Money in the Bank in future to keep the theme going. The point is, in my estimation, if you’re having a “Night of Champions” that’s what it should be – champions only or people doing champion-based things.
Grumbles aside, all four of the matches I’d looked forward to were rewarding, and there are title changes galore across the card. The Tag Title match was especially impressive, and there is a sense throughout the event that the WWE wrestlers did not like the high praise emerging for NXT following their Takeover: Fatal Four Way special event on the WWE Network ten days before: at points it is evident that they are working extra hard to generate the same kind of buzz for themselves. Seth Rollins comes out of NOC especially hot, a fine feat considering he ended up having his match cancelled! And even the tedious Sheamus upped his game for his match with Cesaro, and the two grizzly veterans, Y2J and RKO managed to turn in a performance that breathed new life into old moves. While I won’t be watching this event over and over again like 2014’s stellar Wrestlemania XXX or Summerslam, if you haven’t seen it you could do a lot worse than spending three hours with Night of Champions. DM