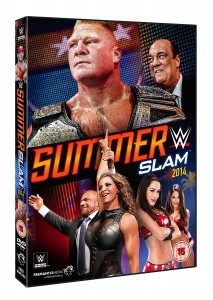 WWE SUMMERSLAM 2014 (WWE DVD)
When the main event match of Summerslam 2014 was announced, many fans felt let down. Another John Cena versus Brock Lesnar match. Yawn. We’d already seen it before, and worse still, there was literally no build-up. Triple H simply announced that Lesnar was the Number One Contender and would be facing Cena at Summerslam.

When the match actually happened, however, it was unforgettable, and now, thanks to having to review the DVD for Mass Movement, it was the very first thing I re-watched. Suplex after suplex. F-5 after F-5. This is not a match, it is an annihilation. WWE’s boldest creative move in years was to see the heroic John Cena absolutely decimated by the challenger, Brock Lesnar – a move we are still feeling the effects of today as we reach the road to Wrestlemania 31 with Lesnar still holding onto the belt he took from Cena with ease.

If you want to witness a piece of WWE history, you already have reason enough to pick up this DVD, but the great thing about Summerslam – WWE’s second biggest event of the year – is that the main event is never the sole selling point. While Lesnar’s demolition of Cena has historic shock value, there is no finer lumberjack match in recent memory than the dazzling showcase put on by future hall-of-famers, and former Shield members, Seth Rollins and Dean Ambrose. Destroying all conventions of lumberjack-matches-past, these two lunatics break free of the lumberjacks and brawl all over the arena in a wild and exciting contest that cannot be missed. If anything will be recorded as the moment Ambrose and Rollins became future main eventers, it will be this match, and it reminded me of those mid-card Intercontinental Championship matches between The Rock and Triple H, or Bret Hart and Shawn Michaels in the past that ultimately sky-rocketed each man closer to their first world title.

Speaking of the Intercontinental Title, the solid opening contest between Dolph Ziggler and The Miz continues to make me ask the question why WWE have been so slow to capitalise on Ziggler’s popularity and talent, and why The Miz continues to be so underrated by many. I feel bad for both competitors – their match here opens the DVD but there is no reason on earth it shouldn’t be the final match on any card. It’s hard to call either of them the “future” of a company where they have worked for years, but it would be too heart-breaking to assume their time has passed.
The second attraction match at Summerslam 2014 was Brie Bella versus Stephanie McMahon, and the build-up for this match was fantastic. The sight of Stephanie McMahon being taken to jail in handcuffs on Raw after slapping Brie was all it took to make me invested in their Summerslam match, and the match itself doesn’t disappoint. Stephanie is one of the finest heels working in WWE today, and she shines here as a cruel but cowardly nemesis of the embattled Bella Twin. It’s just a shame the dramatic betrayal of Brie by her sister, Nikki, at the match’s conclusion didn’t amount to anything in the aftermath – but on DVD none of that matters, and we just get to enjoy a good match without worrying about the missed opportunities to come. Indeed, this isn’t even the best Divas match on the show – Paige versus AJ Lee is a cracker, with some hard-hitting signature moves – especially submissions – that put even some of the men of WWE to shame.

Of course, it isn’t all a bed of roses – no-one in their right mind could raise even a flicker of interest in Rusev’s match with Jack Swagger, playing out the tired old trope of USA versus Russia about twenty years after it went stale the first time. And while kick-off show bonus match Cesaro versus Rob Van Dam is decent enough, it is inessential viewing. Meanwhile, Roman Reigns’ semi-main event battle with Randy Orton did not impress me in the way the first big single match of a man earmarked to main event Wrestlemania is supposed to. I felt positively underwhelmed.

However, on balance, with over three hours of content, the bulk of Summerslam 2014 was supremely enjoyable, with two matches worthy of multiple repeat-viewings and the rest above-average, combined with elements of historical importance that make this event can’t-miss viewing for those who haven’t seen it, and essential watch-again viewing for those who have. Well worth your time. Dan Mckee