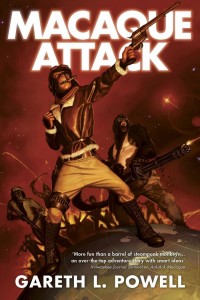 Macaque Attack (Ack Ack Macaque) – Gareth L. Powell (Solaris)
He saved the world twice. Now the dangerous but charismatic Ack-Ack finds himself leading a dimension-hopping band of angry monkeys, facing an invading horde of implacable killer androids, and confronting the one challenge for which he was never prepared: impending fatherhood!
Meanwhile, former journalist Victoria Valois finds herself facing old enemies as she fights to save the electronic ghost of her dead husband, and Merovech, King of the United Kingdoms of Great Britain and France, receives a troubling message from the dead sands of Mars…

Ack-Ack Macaque is by far the coolest character in literature at the moment. This much is, I’m happy to say, fact. His creator Gareth L. Powell, is also the business and this much was proven in the two Ack-Ack novels that preceded this one. Those two were absolutely exceptional and book three does not disappoint. At All.

Beginning at as fast a pace as you could possibly hope, for the monkey madness goes off on full swing and never lets up with dissent rising in Ack-Ack’s gathered army, threats coming in from another timeline, and an asteroid on it’s way to destroy the planet. Add a whole load of heavy drinking, explosions, gun fire and big tanks and a surprising amount of emotional and character depth, and this little piece of monkey business just can’t be beaten. Fact. Gav