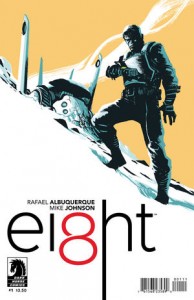 EI8HT #1 – Rafael Albuquerque & Mike Johnson (Dark Horse)
And so on to Rafael (American Vampire) Albuquerque’s deftly titled EI8HT. His latest creator owned offering from the ever innovative, and thankfully enduring, Dark Horse Comics, a publishing house which whilst still not as titanic  as Marvel and DC, is  giant in its own right and a force to be reckoned with .

The story sees the protagonist Joshua making a seemingly Faustian pact with some sinister men in white coats. He will use their shiny new time travel technology to complete a mission for them, in return he will get the use of the technology for his own personal mission- both of which are shrouded in mystery. Mystery is the name of the game here, we are thrown tender titbits hinting at some larger picture, but all issue one does is give a few pieces of the tantalisingly larger story. ..The number 8 of the title enables a communicator to the future- a plot device which will no doubt come into its own as the story unfolds

Rafael’s art is simultaneously scratchy and yet very clean to the eye, making for a very individual style, and for him to be steering both the story ( with the co-penning aid of Mike Johnson) and the art is no mean feat  Rafael’s mission is interrupted right from the start  by  Nila- a Tank Gril lookalike and leader of a rebel faction against a  mysterious tyrant- who I am guessing is the right wing looking
guy who’s face Joshua was told to memorise at the beginning of his mission-Add to this marauding packs of Lizard riders, dinosaurs, flashes of the future and past and we have a rich web of intrigue here, which if issue 1’s fast pace is anything to go by will be a riot to follow as it tantalisingly unfolds… Don Doomcock