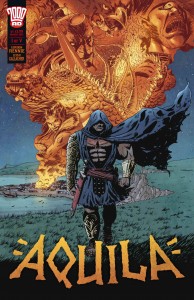 AQUILA #1 – Gordon Rennie & Leigh Gallagher (2000AD / Rebellion)
2000AD’s incursions into the genre of sword and sorcery have been a mixed bag. Whilst Slaine remains one of the longest serving and familiar characters and Blackhawk (to whom Aquila bears a resemblance, which though superficial ,one wonders if this is perhaps a homage to the vintage thrill) retains a warm nostalgic glow, less successful attempts such as the tales of Telguuth  and Witch World – also penned by Aquila’s scribe Gordon Rennie when he was a newcomer,  have struck a less favourable chord.

Witch World however was penned by an enthusiastic young writer, whilst Aquila is in a different league entirely; it comes from someone bolder, more assured and is written with the confidence and craftsmanship of a creator who has spent decades mastering his craft. Whilst the latter too was more overtly fantasy, the vastly superior Aquila, whilst retaining elements of the genre is solidly grounded in gritty, shitty history, to such an extent that one can almost smell the blood and guts as they fall, steaming against, and to, the ground

Thrill powered sword and sorcery seems to work best when it has some historical basis, and though I’m no expert, Mister Rennie seems to have spent a lot of time doing his research, it certainly has the ring of authenticity, as does the art of (relative newcomer)  Leigh Gallagher, which  looks great in colour.  I’d never noticed before, maybe his style is mutating , but there are times in Aquila where I’m reminded of veteran Rogue Trooper and Helltreckers artist Jose Ortiz

The central character is a former Roman gladiator and General who has become ” the undying plaything of a God “, feeding his Demon mistress souls in return for supernatural powers and surviving crucifixion, and of course like Blackhawk before him- his soul- a rather fetching little premise from which no end of fun can be derived . The first issue finds him roaming the British isles under Roman occupation, rubbing shoulders and trading blows with the Iceni  “Bitch-Queen” Bodicea ( aka Boudica) who discusses her plans to sack Londinium.

Though we are only one issue in, the whole thing has an epic feel to it, a grandiose legend beginning to unfold, and it gives the impression of being mapped out to a conclusion already. I for one hope that the journey will be a long one, as Aquila has the feel and weight of a classic 2000AD character who will be around for years to come. There is reason why it has been picked for release in a US format, and I for one hope to see issue 50 of it hit the speciality shops years down the line, for no doubt the saga will take some strange and savage turns before it’s spent. Don Doomcock