Warning: preg_match() expects parameter 2 to be string, object given in /var/www/vip4/sites/vip6102689/httpd/htdocs/wp-includes/formatting.php on line 4866
 Doctor Who: The Witch Hunters – Steve Lyons - Mass Movement
x
Spread the love 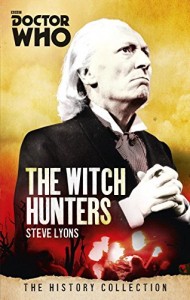 Doctor Who: The Witch Hunters – Steve Lyons (BBC Books)
History is littered, with shameful acts, horrible injustice and the woeful ignorance, petty spite, selfish greed and terrible indifference of humanity; and all too often, the root cause of the collective misery that has spanned the aeons has been the same: religion. We have always been, as a species, driven by our need to place our faith in a power higher than ourselves to help us to deal with the injustices of life and our fear of the finality of death. As such, we are caught in an endlessly vicious circle of petty squabbling and tribal disputes, fuelled by sometimes tiny differences in our beliefs. While religions’ crimes are vast and numerous, sometimes we need to remember ordinary victims, forgotten by mainstream history, men and women like Rebecca Nurse, George Burroughs, John Proctor and Martha Corey, four of the twenty innocents executed during the infamous Salem Witch Trials.

And so to ‘The Witch Hunters’, where we find the Tardis has taken the Doctor, Susan, Ian and Barbara to Salem at the end of the seventeenth century. They find themselves taking on the role of central figures in the incidents leading up to the Witch Trials, eventually becoming inextricably entwined in those barbarous proceedings as events play out the way history dictates they should. All this despite our heroes’ best efforts to save those sent to their deaths by the small minded, restrictive attitudes of people, place and time in which they find themselves. In fact, the harder Ian, Barbara and Susan struggle against its restraints and try to change its unbending journey, the harder it fights back, as the village slowly turns on them and they become victims of the affair they tried so valiantly to stop. Once again it’s up to The Doctor to keep time on track and save his friends from circumstance and themselves, and this time, it takes every bit of ingenuity and cunning the he possesses to do so.

Steve Lyon’s story is engaging and engrossing, and paints an unflatteringly accurate and dramatically realistic picture of the trials, bringing them to extraordinary life through his inclusion of characters that we’re instantly familiar with, and relate to, and so see the spiralling chaos gradually begin to unfold, before it becomes a tsunami, through their eyes. ‘The Witch Hunters’ is an emotionally charged, brutal and entertaining story that brings history to life and questions the fluidity and structure of time while gently reminding the reader that sometimes, no matter how much we want to, there are things that can’t be changed, no matter how hard we rally against them. Just remember folks, there’s no such thing as witches. Or are there…? Tim Mass Movement