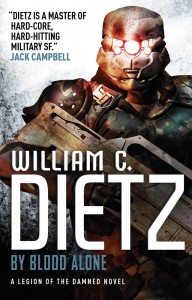 By Blood Alone (A Legion of the Damned Novel: Book Three) – William C. Dietz (Titan Books)
LEGIO PATRIA NOSTRA Far in the future, condemned criminals and the fatally ill have two choices: to die, or to join the Legion of the Damned, an elite fighting force made up of human legionnaires and cyborg soldiers. If they enlist, their bodies will be destroyed and their minds implanted in gigantic armored killing machines, programmed to fight for the Human Empire. A generation after the second war against the Hudathans, discontent is growing in the Human Empire, and military cutbacks see many former legionnaires out on the streets. When Bill Booly III, son and grandson of the great war heroes of the same name, refuses to give false testimony in the military court, his punishment is being sent to the most unpopular place in the galaxy: Earth. But when a group of rogue legionnaires try to overthrow the government, Booly finds Earth the pivotal point of the battle – a battle which can be resolved by blood alone.

The third part of the Legion of The Damned series is, again, set years after the predecessor, and again, sees the land, once more, plunged, into a state of war. First things first, in order to understand the complexities of ‘By Blood…’ you really do need to go back and read the first two novels in the series. This isn’t a bad thing, I had the pleasure of reviewing both, and they are superb. As a stand-alone though, ‘By Blood Alone’ could prove a bit difficult to follow, even allowing for the progression in the time scale and setting.

Dietz manages to prove, once again, why he is so well regarded in the annals of Sci- Fi. This time, as in the second novel, he moves the focus a little further away from the Legion, a cyborg army made up of the worst criminals and terminally ill looking for an alternative to death and utilises a human focal point instead. In doing this, Dietz has managed to keep an ever more familiar setting fresh, and just as interesting as it was when it was first used. There are also a lot of future plotlines set in motion and some very interesting speculation s regards technological development and advances in weaponry and warfare. The characters being linked to previous outings is a nice touch and leads very quickly to them becoming just as important to the plot and unrelenting warfare, which if anything adds to the series appeal. Something I didn’t think possible.

Fans of Military Science Fiction really need not look any further than this series, as in all honesty, this is as good as it gets. Brilliant. Gav