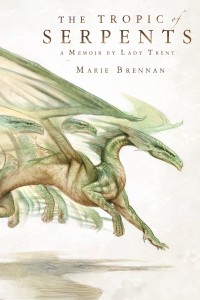 The Tropic of Serpents (A Memoir by Lady Trent Book Two) – Marie Brennan (Titan Books)
Attentive readers are already familiar with how a bookish young woman named Isabella first set out on the historic course that would lead her to becoming the world’s premier dragon naturalist. Three years after her journey through Vystrana, the illustrious (and occasionally scandalous) Lady Trent defies convention to embark on an expedition to the war-torn continent of Eriga, home of the legendary swamp-wyrm. Accompanied by an old associate and a runaway heiress, Isabella must brave oppressive heat, palace intrigues, gossip, and other hazards in order to satisfy her fascination with all things draconian, even if it means venturing deep into the forbidden jungle known as the Green Hell… where her courage, resourcefulness, and scientific curiosity will be tested as never before.

The Tropic of Serpents continues pretty much where ‘A Natural History of Dragons’ left off, Lady Trent started off as a young curious character feeling quite restrained by the land and society she was part of, throughout the first novel Trent’s development and evolution through her memoirs was very well written, entertaining and wonderfully brought to life.

In ‘The Tropic of Serpents’ the documented study of dragons is brilliant to read, this time going into depth about the lives and habits of the creatures, including everything from how they interact with other races, the difference in breeds and even their mating habits.

Brennan, again demonstrates impeccable skill in her descriptive ability and perfectly builds and shapes the very Victorian world of the setting, and Lady Trent and the Dragons she is so desperate to understand. Thoroughly recommended. Gav