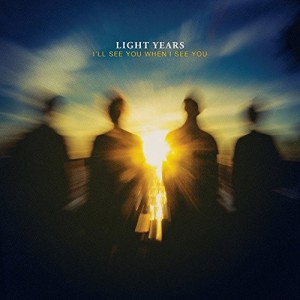 So this is what pop punk sounds like when it’s grown up and shed that teen angst.  Cleveland, Ohio’s Light Years are a massive breath of fresh air for a genre, which has lost quite a bit of credibility over the last 10-15 years. It all started so great. IN the late 70’s –early 80’s we had The Buzzcocks and The Undertones in the U.K and the U.S had Bad Religion, Dag Nasty and Social Distortion. The late 80’s-early 90’s brought us The Offspring, Green Day which rolled into the mid- late 90’s peak of bands like Blink 182 and New Found Glory. Then it all went wrong. Personally, I blame Bowling For Soup. Light Years are here to help get back some of that much needed credibility.

They don’t have a gimmick, the lyrics aren’t cheesy or hilariously ironic. They play straight up, no frills, good honest punk rock, clearly influenced by that good period in the early- mid 90’s. Their 2013 debut “I Won’t Hold This Against You”, mainly focused on inescapable past while looking for ways to heal the scars incurred while coming of age. A year later the band released a five-song EP entitled ‘Temporary’. “I’ll See You When I See You” still dwells on those darker themes and loss and as frontman Pat Kennedy comments “We felt “I’ll See You When I See You,” was a fitting title because we really don’t know what will happen next. In life everything can change in an instant. Nothing is promised.”

You won’t go to see Light Years play because the guitarist is hot, or because they are “crazy” live but you will go and see them to see 4-guys playing punk rock from the heart and it’s that passion that comes through on this record. They play like they mean it. “I’ll See You When I See You” is out now on Rude Records. Do the scene a favour and pick it up..… Chris Andrews