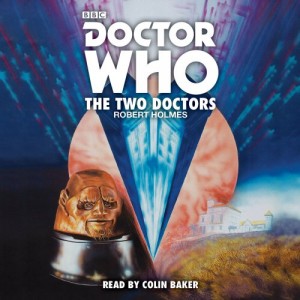 When I was asked to review The Two Doctors, three images immediately sprung to mind.

It’s a little odd that these are the things that I remember when thinking about the televised version of this Second and Sixth Doctor team-up. The story remains muddled in my middle-aged mind, but I do recollect it being about a race of gourmand aliens (read: cannibals), and the Second Doctor slowly evolving into one of their own. I also remember the name of this race of very hungry aliens – Androgums. (Because Androgum is an anagram of Gourmand – see what they did there?)

But forget the televised version. Listening to this audio adaptation of Robert Holmes’ novelisation brings it all flooding back – every last daft, entertaining and WTF moment of it. So let’s revisit the story very quickly:

The Second Doctor and Jamie are sent by the Time Lords to space station Camera in order to put a stop to the unauthorised time travel experiments being carried out there by the head of projects, Dastari (another cunning anagram, as Dastari = A TARDIS). Dastari has been biologically augmenting Androgums, a race of voracious gourmands blessed neither with looks or intelligence, including the chatelaine Chessene (Servelan!) who has secretly allied herself with Group Marshal Stike of the Ninth Sontaran Battle Group. The Sontarans raid the station, killing almost all on board, before capturing the Second Doctor and taking him to Earth, imprisoning him in a hacienda near Seville. There, Dastari, also in league with the Sontarans, plans to dissect him in order to find something called The Rassilon Imprimature – the symbiotic nuclei within a Time Lord’s genes that are the key to time travel.

Meanwhile, the Sixth Doctor and Peri rescue Jamie from the station and follow the trail to Spain. Dastari imprints the Second Doctor with genes taken from Shockeye, the space station’s Androgum chef (and it’s here that we start to see those terrifying orange eyebrows come in to play), but the Sixth Doctor arrives intent on rescuing his former self…

I always felt the BBC treated the Sixth Doctor pretty badly, so it’s great that he’s now being given a chance to shine.  And the story is much better for it. Colin Baker’s interpretation is calmer and more measured than his bombastic television portrayal was ever allowed to be. He reads well and juggles the roles of both his own Doctor and that of his predecessor well. He even manages to do a pretty good impression of Peri, who is suitably nasal and whiny. And though he sounds a little older around the edges than his 80s incarnation, rather disconcertingly (sounding exactly like David Attenborough when out of character), this is only to be expected, as, despite what Doctor number 10 may say, for us humans, time is not wibbly wobbly, and is strictly linear. Rebecca Ferriday