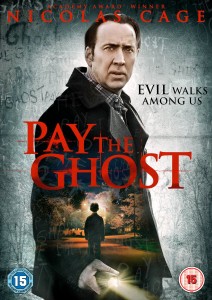 Pay the Ghost, based on a story by bestselling British author Tim Lebbon, is a film that takes the tropes of the supernatural sub-genre and does what all good genre fare should: it uses them to say something about the everyday, about what’s important in our lives and the relationships we often take for granted. But it does so while scaring the living crap out of us at the same time.

The movie begins in 1679, in a fledgling New York where three small children hide under the floorboards of a cabin as something untoward happens above them. Flash forward to the present day and we’re introduced to the family unit of Kristen Lawford (The Walking Dead’s Sarah Wayne Callies), her workaholic university professor husband Mike (Oscar-winner Nic Cage), and their cute as a button son Charlie (Jack Fulton from Hemlock Grove and the forthcoming King miniseries 11.22.63). Charlie’s already seeing weird things through his window at bedtime, but that ramps up a notch when Mike takes him to the Halloween parade – only just making it back from work in time.

When Charlie asks his dad if they can “Pay the ghost”, the boy promptly disappears, leaving Mike to scour the streets and somehow explain to both the authorities and his wife how he let his son slip through his fingers. We jump forward again, this time only to next Halloween, but the fallout from that event is very apparent. Mike has thrown himself into trying to work out what has happened, obsessed with taking even the smallest clues to the police, while his marriage has fallen apart. The more he investigates, though, the deeper into a sinister myth he finds himself delving, taking him into the world of the homeless and the hopeless. Can he really get his son back, or is he lost for good? You’ll just have to watch to find out…

Pay the Ghost deals with every parent’s worst nightmare, that of losing a child in a crowd, calling to mind last year’s superb BBC drama The Missing, starring James Nesbit. It’s what keeps the movie grounded, even when the spooky stuff kicks in – and boy does it kick in; I jumped on several occasions during its running time, which is actually quite a hard trick to pull off. Yes, there are shades – if you’ll pardon the pun – of films like Poltergeist and Insidious (especially when psychic Susannah Hoffmann is brought in, for one of the most memorable turns of the movie), plus nods to The Exorcist, not only in a possession scene but also in the straight way the material is treated (Cage himself mentions Ellen Burstyn’s performance in the fifteen minute ‘making of’ featurette). But it’s put together in a highly original way, and the mythology behind it is also quite chillingly believable.

Add this to some atmospheric direction, a script by Dan Kay that expands upon the source material just enough not to edge into padding territory, and some solid acting from Cage and Callies – who really do sell the fact that their son is missing – and you have a pretty decent foray into the realm of supernatural terror. Why this didn’t get a cinematic release over here, I really can’t understand – it definitely deserved one, so people could see it on the big screen. As it was the crystal clear Blu-Ray cut I watched was certainly a close second.  Haunting and horrific, it’s perfect viewing.  Paul Kane

Not quite as bad as the “one splat” rating on Rotten Tomatoes suggests it is, ‘Pay The Ghost’ is certainly no genre classic, but it’s a workmanlike supernatural thriller that will happily while away 90 minutes if you can get past the hokey Scooby Doo plot. It’s based on a story by (decent) English horror writer Tim Lebbon, in which a seventeenth century woman is not only put to the stake accused of being a witch, but is forced to watch her three children burnt before she dies as well. Understandably she’s a mite pissed off with this, and unleashes a curse on her tormentors (so she was a witch after all!): she and her family were murdered on Halloween night, so every Halloween night she vows to return – now a caped crone – to steal away three children, to add to her vast growing collection of unhappy kiddie souls on the other side. So far, so ‘Insidious’ then.

Nicholas Cage phones in his performance as Mike Lawford, whose son goes missing during a local Halloween carnival, and his estranged wife is played by the ever watchable Sarah Wayne Callies (‘The Walking Dead’), and they generate just enough chemistry to make their strained relationship believable. And that’s the problem with ‘Pay The Ghost’, right there: everything is just enough. There are just enough jumps and just enough tension to keep you watching, and it feels like with a bit more effort/focus it could’ve been so much more. The ending is pretty silly, even by Nicholas Cage straight-to-DVD standards, and feels like a desperate rush to tie the various plot devices together into a cohesive whole, complete with shoddy CGI, but at least it looks good up until then, with lots of moody cinematics to distract you from the fact it’s coasting instead of cruising. Ian Glasper