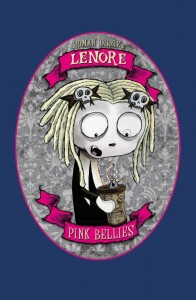 Lenore: Pink Bellies – Roman Dirge (Titan Books)
Death has driven artists, poets, writers and songwriters since the beginning of human history; its cold dark embrace, the mysteries that lie beyond its veil all fuelling the imaginations and aesthetic journeys of countless thousands. None however, have followed the same path as Roman Dirge, who’s darkly comic, Poe inspired creation Lenore (the cute little dead girl) continues to tread her own individual imaginative and blackly funny path with her friends and constant companions, the bucket headed Pooty and her trusted stuffed rabbit, Ragamuffin.

In her latest adventures, collected as ‘Pink Bellies’, she and her friends find themselves skipping into an alternate dimension where they meet the squid versions of themselves, who are toying with the crew of a reality television show and trying as hard as they can not to get killed (again) when they get caught in the middle of a war fought by ancient Eyptian Gods. This war is directly related to Taxidermy’s (her strange guardian angel) origin story, which is also explored in glorious, and witty detail. And did I mention the Death Squad sent to track them down, or Ragamuffin’s encounter with a bear? I didn’t? Oh well, that’s probably for the best as I would’nt want to spoil a second of this wonderful story for any of you. Which it would if I talked about them. Well, it might, but I don’t want to take the chance that it could. So I won’t mention them. Mum’s the word and all that.

‘Pink Bellies’ is a delicious, stygian take on the Gothic and Victorian traditions of story-telling, traditions that given a modern make-over in its pages and dragged kicking and screaming into the twenty first century. Drawing inspiration from Charles Addams, Tim Burton and Robert Crumb, Lenore is a subversive collision of ‘The Addams Family’ and ‘Beetlejuice, that thrives on an undercurrent of MR James, HP Lovecraft and Clark Ashton Smith while embodying the original spirit of Mad Magazine. And once you start reading it, you’ll never want to stop. Ever. Ghoulishly good fun… Tim Mass Movement