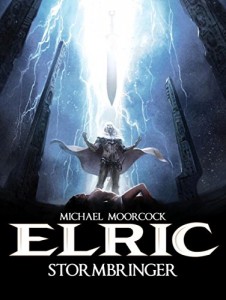 Elric: Stormbringer – Julie Blondel, Didier Poli & Robin Recht (Titan Books )
I’ve always wondered if Michael Moorcock had even the slightest inkling of what he was unleashing on the world when the Melnibonean Emperor leapt from his imagination and began his fantastical adventures as an incarnation of the Eternal Champion. Elric, along with Robert E. Howard’s Conan, encapsulates everything that a sword and sorcery, or if you prefer, fantasy hero should be; a brooding, swashbuckling pirate, a reaper, lover and fighter who while given to great melancholies can also be relied upon when it matters. A man, or in Elric’s case Melnibonean, who when all the chips are down and push comes to shove, will always do the right thing. He was, is and always will be, for me at least, the definitive hero of fantasy fiction; and judging by the introduction that he contributed to ‘Stormbringer’, Alan Moore feels exactly the same way.

Blondel, Didier and Recht’s adaptation is truly a thing of wonder. The stark, dark beauty of the artwork combines effortlessly with the flowing prose to tell the story of Elric’s quest to retrieve his lost love, Cymoril from the clutches of the would be usurper Yrkoon, of the deal he makes with the God of Chaos Arioch in order to rescue her, of the sacrifices he has to make in order to fulfil his bargain, of the burgeoning relationship he forms with the drinker of souls, the black blade, Stormbringer, his sorrow and the loss of his Kingdom. In my mind’s eye, this was always the way I saw Elric’s world. The ancient spires and gleaming city of Melnibone, the cruelty of it citizen’s and the strange and foul gods and demons who manipulate the destinies of those who serve them, all pictured in exquisite, alluring detail as the tale of the damned ruler, Elric whispers from the page, and to have it captured it so perfectly, so beautifully, makes my soul weep and heart sing. It is incredible, absolutely incredible, a work of indulgence that can, will, be savoured, cherished and enjoyed time and time again. Magnificent… Tim Mass Movement