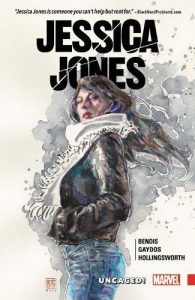 After Alias, and before she hit the screens on Netflix, Jessica Jones had pretty much just become Luke Cage’s partner in fighting crime, almost giving up the hero business, walking away to be a wife and mother instead. Which was kind of a shame, as Jessica Jones was always a bad ass. She didn’t take any crap, she stood toe to toe with some of the heaviest hitters in the Marvel Universe and never backed down and she had far more in common with Richard Shaft and Phillip Marlowe than she did with most of her colleagues in the superhero community. So, it’s nice to see Brian Michael Bendis picking up the reins of her destiny again and making Jessica Jones the main player in her own life. But time changes all things, and while he seemingly does a factory reset on Jessica, everything isn’t exactly what it seems to be, as caught up in the machinations and devilment that is S.H.I.E.L.D., she’s running against type and learning what it really means, and costs, to bring justice to those who are hell-bent on subverting it.

Ostracized from her friends and husband from the get go, in Uncaged! Jessica’s story starts in gaol, from where, after being bailed out, things just go from bad to worse. Her personal life in crisis, she’s hired for what appears to be a randomly straightforward chase the husband case that rapidly descends into homicide and exposes her to the greatest secret that the upper echelons of heroville are desperately trying to keep hidden from the world at large. And that’s before she’s brought into the fold of a semi-terrorist organisation looking for an inside woman in the world of caped crusaders, one who’s willing to do whatever, whenever, to earn a big payday and Jessica being Jessica, well she might just be the fly in the ointment that they’ve been looking for. Oh, and did I mention her personal life? I did? Good, because it’s convoluted and twisted enough to make the Kardashian’s look like the kind of white picket fence neighbours that we’re all told we want to live next door to, but if we ever did, would probably bore us to the point of insanity within a month of meeting them. The forthright, direct characterisation, bare knuckle dialogue and downright mesmeric plots within plots with plots storyline courtesy of Bendis, coupled with Gaydos’ finely detailed, noir flavoured artwork have made sure that Jessica Jones has reclaimed her throne and once again assumed her rightful position as one of the toughest anti-heroes in the four colour word. Welcome back Jessica… Tim Cundle