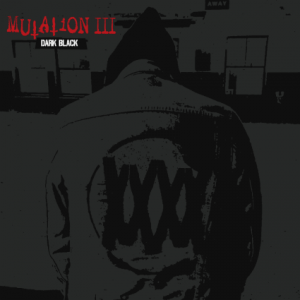 Conceived in a caravan by Ginger Wildheart and Scott Lee Andrews of Welsh noise mongers Exit International, Mutation III: Dark Black is about the power of depression. Both are very open about suffering from various mental health issues, but in this particular case, they’ve been able to channel those feelings into a truly violent and disgusting album and I mean that in the nicest possible way.

A mind blowing assembly of similar minded musicians, all have a part to play on this album. Check this for a lineup of musical delinquents.  Devin Townsend, Phil Campbell, Arthur Shepherd of Primitive Weapons, Jamie Oliver of UK Subs, Mauro Pawlowski (ex-dEUS) and the mighty Paul Catten (Barrabas,Medulla Nocte. The band lurch through various degrees of heaviness, mostly reminding me of Ministry at their best. Authenticity is an all-out death metal assault, complete with blast beats, while Irritant manages to make the line “fuck off you cunt, you are an irritant” catchy enough for me to be singing it over and over. Thankfully the kids are in bed. Devolution is almost beautiful in its heaviness, with some epic keyboard work. Final track Deterioration is a fitting end to the album as it can only be described as the sound of someone’s mind collapsing. Brutal stuff.

Ginger has been doing this for 30 odd years now and has always known how to write a tune, but rarely has he ventured into this sort of territory. Personally, I hope he’s planning another little escapade to the caravan, because if these are the results, then we should all be very happy…Chris Andrews