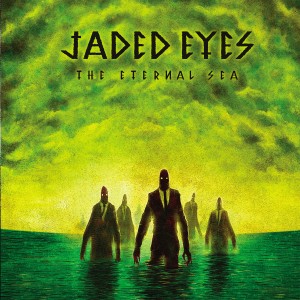 I remember when Jaded Eyes first appeared, they embodied “the band you’ve always wanted to be in”. Like kids in the hardcore punk sweetshop, their pick’n’mix featured flavours like Dag Nasty, Government Issue, Scream, Naked Raygun, The Ruts, The Damned and many more all shaken together to combine a sweet riot of musical flavour. But if the debut album served almost as a tribute to the bands that influenced the band over the years, this second record sees them develop their own style and deliver it with a lot more confidence. Initially I loved the songs that capture that melodic US hardcore style, but this record has much more depth. The opening tracks “Do You Remember?” and “Understand” are similar in style to the debut, but then you get to the likes of “Conservative” and “Plan B”, longer songs that allow Jaded Eyes to show off their versatility and songwriting skills. The overall effect is that it works extremely well as a continuous piece of music, taking you on a journey for it’s entire duration. Given the bands that have influenced Jaded Eyes, it felt to me that the debut album was almost an easy record to write whereas on “The Eternal Sea”, they’ve built upon the foundations they previously laid down and in doing so, have created something magnificent. Tom Chapman