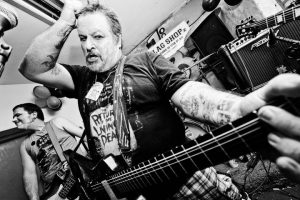 The first time I heard this was at a rehearsal studio in 1977 that I shared with a Group called THE MECHANICS. I had just bought my copy that day. Three friends and I, who all had a copy each as well, decided we were going to all drop LSD-25, about 7-10 drops on a sugar cube each, sit in the main rehearsal showcase room and listen to it in its entirety without interruption.

We set up the turntable in the middle of the room, hooked it up to the PA system (four voice of the theatre cabinets with 300 watt Sunn 0))) power amp), positioned the four cabinets with their backs to the turntable and facing each wall. Then we took one side each of our copies and stacked them in order (side 1-4) on the spindle. We fired up the PA loud, (we were coming on to the LSD pretty good at this point), hit the play lever on the turntable, sat in opposing corners, turned the lights off and waited. The only visible thing was the small red indicator light on the Power amp. When the first “notes” hit, “Our minds split open” (reference Lou Reed lyric from “I Heard Her Call My Name”). I have never even come remotely close to the “trip” I went on for the next 1 hour 4 minutes and 4 seconds – each side clocks in at 16:01 which is the perfect length for maximum sound replication definition on a 12” disc rotating @ 33 1/3 RPM- (ad infinitum, the final side has a locking groove).

I saw the most intense and vivid hallucinations, literally left my body in a quasi-astral projected state, morphed into millions of shapes, creatures, colours and sizes, experienced sensations and emotions I never knew existed. It seemed as if it lasted a millennium. And the sound; the sounds of Metal Machine Music was the soundtrack to this journey of all journeys. I felt as if I travelled to every nook and cranny in the universe and then some. I didn’t see God- I WAS GOD. When the final side locked into the aforementioned groove I have no idea how long it went until I noticed a line of glowing light floating to the right: It was the sun outside shining through the thin space under the front door. It was morning. We started this journey at 11:00PM the night before. The record as if by magic of pure will escaped the locking groove and the sound stopped. There was a few moments of utter silence, You could hear a micro-pin drop. You could hear a flea fart.

We all very gradually started giggling quietly, which cascaded into what sounded like 4 raving lunatics gone mad, which went on until someone from outside opened the door. It was one of the other band’s members coming to do some drum practice. The hysterical laughter turned into screams of pain. The sunlight completely blinding us like I have never experienced, as well as my fellow ‘travellers’. It took a good 30 minutes to adjust to the light. I can honestly say I have never been quite the same since, but I feel it was key in my perspective on everything, which flooded me with infinite creative juice that I have tapped into and will tap on for the rest of my mortal life – and then some! It remains my number one all-time favourite record ever. I still listen to it at least once every couple weeks. The first time I played it for my mom (about a year ago), I thought she would be annoyed and freaked, but she suddenly got this look of amazement, and after a few minutes I asked her if she wanted me to turn it off, and she was like “No, let it play. It reminds me of what you would hear when you pass on, en route to Heaven”. She was born in 1929. I was awestruck by her reaction, but knew that this was the tree this “Strange Fruit” fell from. Rikk Agnew