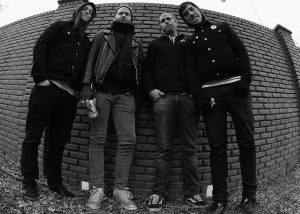 Battling through some of the worst snow to hit London’s streets in years, Mass Movement caught up with Municipal Waste’s Tony Foresta to discuss his new band No Friends, Wikileaks, conspiracy theories and the state of US politics.

Municipal Waste are in town touring with band of the moment, Saviours. We caught up with front man, Tony Foresta to talk about his new project, No Friends. Very much a departure from the sounds usually associated with the thrash-metal band for which he is well known, No Friends take heavy influence from the DC-hardcore scene, citing Dag Nasty at top of that list.

Seated in the faux-regal green room of the Islington’s o2 Academy, Tony Foresta is preparing to warm up for his Municipal Waste show, a few days before Christmas. It may be cold outside but there’s a warmth and friendliness emanating from Tony that fills the almost cavernous space, enough that he only needs to sport a t shirt and jeans despite the lack of heat backstage. He is seated on a plush, purple velvet chaise longe, and despite wearing a bandana keeps pushing his long hair behind his ears to make himself at easee. Genial and polite, Tony seems more interested in ensuring that we are treated as guest and are welcome than he is in his own comfort.

No Friends formed in 2009. A mutual meeting between Tony and the other guys in the band led to a natural jam-session, which has since become more than just a ‘side project’. Pretty impressive, not only when you consider the writing and touring time taken up by the Waste, but also that the other members of No Friends are in full-time bands Gator Face, Dead to Me and No More Black. No Friends as a unit are constantly writing and touring in their own right. These are guys who like to keep themselves busy and that’s before the whole long-distance relationship and the regular day-jobs are brought into the equation.

“I just bought a house in Richmond,” Tony announced; “I was going to move to Florida last year but then I got a really sweet deal on a house and the mortgage was real cheap. So I thought: ‘fuck it, I’ll stay here and I love Richmond; it’s where I belong.‘ Now when I look back, it was just a year ago and I’m glad I didn’t move to Orlando because I would have been a bum.

“I visit all the time. My family is based out of Florida, so for me, I do a long-ass tour with the Waste, then I go home before going to Florida where I visit nieces and family, and then play music with my friends down there.

“People have said it’s a side project of course but for the boys, it’s a full-time operation. We do our shit, just about as much as a smaller band does:we tour twice a year; we put out a record a year; we’ve already done three things and 4 tours. Most bands who are two years old don’t have that under their belts, so you can say it’s a side project but we’re also a bit busier than most bands are full time”

Aside from Tony on vocals, No Friends are bassist, Alex Goldfarb, drummer Richard Minino and guitarist Sam Johnson. Alex, Richard and Sam all live in Orlando and crossed paths with Tony when they were in New Mexican Disaster Squad.

“Waste toured with New Mexican Disaster Squad. Back in the day, in the second year we were a band, we would tour and run into these guys so I’ve known them for over 10 years. We would always drunkenly talk about doing something together, even one of the last shows New Mexican Disaster Squad played with the Waste in Birmingham (Alabama), we were drunk and I said ‘we should do a band, I’m in Florida all the time, look me up.‘ So we kept in touch and it just spawned from that.

At the end of 2010, No Friends released their latest EP, Traditional Failures as a free download. When most bands are trying to curtail their music being distributed for no return, No Friends are embracing it as a way to get their music heard by as many people as possible.

“We’re giving it away for free online and I went ahead and paid for 1000 copies of CDs and I’m giving them out too. It was just something that could happen, we had a deal recording it, we put it out on vinyl so we get money back for that. We liked it a lot more than the LP we did, so we just wanted to get it to as many people as possible. It sounded a lot different than the first thing we did so we were like: ‘fuck it, let’s just get it out to as many people as possible.’

It is this altruism that not only sets No Friends apart from some other bands who see free downloads as purely a marketing tool, but also that Tony has a real passion for reaching a whole new, younger audience and using this to open doors to some music history.

“The younger kids more like the brutal aspect of hardcore, that’s definitely a problem we have because we’re trying to be the more melodic side of it, like Dag Nasty, the layered stuff. It kind of goes over a lot of the younger kids heads: it’s got to be super brutal, fast scream-y, definitely switched off on the melodic parts, which makes it difficult for people to get into us straight of the bat.

“I don’t mind that at all because I think people come to see us and expect to see a Waste side thing. They are going to be totally disappointed because it’s not that at all. I mean I am screaming a lot and it’s brutal in parts and it’s pretty fast but there is a melodic side to it too that people will be taken off guard. But I like that because I don’t want to just bask in my other band, I want to branch out and do something different.

“A lot of people back in the States have gotten it. It’s got into the right hands and I’m hoping that works over here too.

“I like to think of Waste as a gateway drug. It’s the first thrash band kids listen to and then they’re like ‘oh there’s this band and that band’, then they turn 19 and don’t come to our shows any more. No Friends is more older dudes but I wanted to get the kids and I wanted the kids to start going back and looking for those bands. Well, hopefully we are getting kids into that stuff, like Dag Nasty and Government Issue.”

Not only are No Friends looking to influence some younger fans into their hardcore heritage but also to help them embrace the burgeoning scene that is bubbling under the surface with social and political resentments.

“People are a bit more pissed off about what’s going on in the world, that’s usually the best time for metal, punk, everything. People are pissed, people are still feeling the George Bush backlash.

“No Friends is more personal but there’s definitely some more political stuff in there. Me and Sam write most of the lyrics and we definitely have that in there. There is so much bullshit going on in the States it’s overwhelming. Every day you look on the computer and we have look to the computer because you can’t really get information any more from the TV. Our news, the news in the States, it’s insane, it’s so biased, it’s fucked up, I mean it’s like they will straight up misinform you to sway your opinion

“Fox is so right-wing it’s insane, it’s frightening.  I don’t watch it any more. It is scary. It will show you something and lie to you about it, tell you it is something else.”

Tony is pretty switched on and passionate about politics that it was impossible to not get his opinion on the rapidly unfolding Wikileaks story that was absorbing all news worldwide while he was touring.

“I think it’s really embarrassing just the fact that they’re trying to dig up dirt on that guy [Julian Assange] and it just shows how much influence these companies have and who they are really backing. It’s scary. Everything is run by big business and it’s starting to show especially with this whole thing, it’s starting to be really blatant and in everyone’s face, even people who wouldn’t normally notice that.

“The sex scandal thing is hilarious, it’s like: ‘Come on, you could have though of something better‘. One of the girls is tied directly to the CIA. That’s what I read, I read that somewhere but you know, it’s ridiculous. But you think ‘that’s shit’; you think of those people who you grew up with who were wackos, with these crazy conspiracy theories and then it’s like for real and it’s maybe even worse. Who knows what’s going to come out in the next couple of weeks? The more that guy gets, the more he’s going let out.

“So people are scared. The money is coming from somewhere and they don’t want to cut that off. But it just shows you how especially in America, big business runs everything.

“Another fucked up experience on this tour: I got really sick and I went to the doctors and it was so much easier, I spent like 100 dollars and I got so much medicine, I got so much medicine I was better in 2 days there is no fucking way if I was in the States I would have spent over 1000 dollars on all this stuff I had. It’s crazy, it’s just so fucked up.

The conversation quickly led into the recent student protests held at Millbank a few days before the Municipal Waste show.

“At least you guys have the balls to have a good riot. We haven’t had a good riot. That’s what America needs, one really good riot like that, scare the shit out of people. They’ll shoot your ass in America if you try that shit. Oh they’ll say it’s rubber bullets or something equally as ridiculous, they’ll beat the shit out of you, they’ll use tear gas on you, they’ll make sure that you don’t want to do it again. It’s fucked up. I mean they’ve got guns. It makes you mad. In the past couple of years it makes you realise we haven’t given much thought to how fucked up it really is, you know?

“And people are putting it into something really good like letting people know what’s going on.

“I try keep track of shit, what’s going on in the world especially when I am travelling the world I want to get to know a little something. I have my ear to the ground more than most singers in thrash bands, I’m not as dumb as people think I am but I am pretty dumb I’m a little smarter than I let on sometimes.” 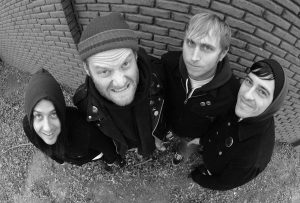