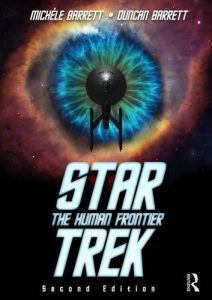 Michele and Duncan Barrett’s Star Trek The Human Frontier was first published a decade and a half ago, one of the wave of academic tie-ins to the series that were flooding the world back then – and one of the few I actually read at the time. Not for me the philosophy of Star Trek, the logic of Star Trek, the science of Star Trek or the plumbing of Star Trek; as a lifelong fan of the series I had, intellectually and emotionally, benefitted as much as I needed from what I’d seen, heard and felt during transmission, thank you very much. Many of these tomes seemed desperately stretched in their subject matter, not tie-in but cash-in. The Human Frontier was different (I admit, though, to being enticed to read further by the real reason the show’s theme originally had lyrics, a wonderfully premeditated gossip-hook to the book’s raison d’etre) – a thoroughly researched and referenced insight into how the human element of Star Trek in its various and varying incarnations mirrored our own changing society while, as the years went by, was influenced by it. Now updated to include the likes of Enterprise and the JJ Abrams universe, it remains an extremely readable work crammed with detail and analysis (if bland photographs) that recall dialogue, reaction and situation in the context of what it is to be human, not only from an Earth-bound production perspective but in the actuality of exploring limitless space. Far from dry – my fear upon original first sight back when – this book’s attention to the small things serves not only to add additional layers to what upon initial viewing might have seemed trivial circumstance but also to remind one, in the many quoted, pivotal exchanges, that, when it comes down to it, it isn’t the crews of the many Federation ships and space stations but us out there. Recommended.  Mike Wild